The puffer fish is a sea fish in the Animal Crossing series introduced in Doubutsu no Mori e+. It can be found all day from mid summer to early fall.

"I caught a puffer fish! So cute! So painful!"

"I caught a puffer fish! Ouch!"

"I caught a puffer fish! I thought you would be tougher, fish!"

Upon donating the puffer fish to Blathers in the museum, he will say this:

"Puffer fish are tastier then they look, you know! Not at all rubbery! Just imagine if you could inflate them, THEN eat them! POP! Delicious! That would be a hit with the kids, eh wot?"

As the puffer fish is donated to the museum, Blathers will say this dialogue.

"If you actually bother to count them, the average puffer fish is said to have around 400 spines on it. Oh, and in case you don't know, while the puffer fish may look like a blowfish, it is NOT poisonous. So, on the whole, this fish is much less fearsome than it looks... Or perhaps it just believes in fair play, wot?"

It can be found in the back sea tank, with other sea fish. It spends time as the non-puffed fish, then will puff up and show its spines when another fish comes too close.

An information board in the aquarium displays this description of the puffer fish upon donation:

"As expected, all Puffer Fish are covered in spines. While related to the blowfish, they are not poisonous. Exaggerated claims about the fish say they have 1,000 spines; the true number is between 300 and 400. When threatened, they suck in water and air to puff themselves up in order to intimidate enemies."

"Like its cousin the blowfish, when the puffer fish feels threatened it inflates into a spiky balloon. The biggest difference between them is that the puffer fish is not deadly poisonous like its kin. So while it may look scary, the substantially reduced risk to life and limb makes it much better company."

During a Fishing Tourney, when given a puffer fish, Chip will say the following dialogue.

"You can eat puffer fish, but it takes courage. What with all those spiky pokies! Nyuuuk nyuk nyuk nyuk!"

"You know, puffer fish CAN be eaten, but you better know what you're doing, like me! No amateurs on this one! Luckily, I am no amateur! Time for ol' Chip to snack! YUM!" 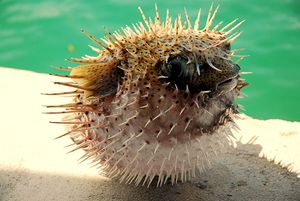 As a defense mechanism, puffers have the ability to inflate rapidly, filling their extremely elastic stomachs with water (or air when outside the water) until they are almost spherical. Thus, a predator stalking the puffers may suddenly find itself facing what seems to be a much larger fish and pause, giving the puffers an opportunity to retreat to safety. When the fish is lifted out of water, there is a risk that puffers may inflate with air. This may result in problems deflating again afterward. When this happens with aquarium specimens, the recommended course of action for fish keepers is to hold the puffer underwater by the tail, head upwards, and shake the fish gently until the air escapes out of the mouth.