The guppy (グッピー, Guppī) is a rare fish found in the river from April through November between 9 AM to 4 PM. It is rarer during April, but will become easier to find as the months go on. It sells for 1,300 Bells in Nook's Cranny. Its shadow size is tiny.

"I caught a guppy! He ate an awful lot of bait for being so tiny!"

"I caught a guppy! Word uppy!"

"I caught a guppy! I gotta show off this puppy!"

"I caught a guppy! Welcome to the team, newbie!"

As with all fish in the Animal Crossing series, the guppy can be donated to the museum by talking to Blathers, who will also give a small talk about it.

"Hoo hoo! Hullo, little fishy! Aren't we a tiny little fellow! Adorable! Why, I believe it stuck its tongue out at me! Hoo-rumph! Nevertheless, we'll take care of the little blighter! I'll keep an eye on this mischief-maker myself!"

"Many don't know that the guppies with ornate tails are actually the males! Indeed, the females are quite dull...much like Celeste, always stargazing. I really wish she would pay attention to something else on occasion... Ah! I'm terribly sorry! That wasn't what we were talking about, was it?"

"Male guppies are known for their colorful, bright scale patterns... But look closer, and you'll see males share a design with their female peers... Indeed, a matching couple! It seems like the pairs are a little shy about their romance and tend to hide it. Simply adorable!"

The guppy can be found in the small tank in the bottom-left of the aquarium, with other tiny fish in City Folk.

"Guppies are tropical fish that are related to killifish and live in warm rivers. They are popular fish that have been bred to have beautiful flowing tail fins. Mother guppies give birth to their babies after the eggs hatch in their bellies. They give birth at a rate that's nearly constant, so their population tends to grow rather quickly."

"Oh my! Would you look at that! Such a beautiful, snazzy little fellow that guppy is! The shape and coloration of guppy fins are all unique. Quite eye-catching, I must say. Do you imagine they host contests for 'most snazzy'? And...do you suppose I might receive an invite?"

Once donated to the museum, the guppy can be found in the small fish tank in the first room of the fish exhibit, sharing it with rainbowfish and nibble fish.

During a Fishing Tourney, when given a guppy, Chip will say the following dialogue.

"I like my guppies live and spunky! You pop 'em in and just let 'em swim! Nyuuuk nyuk nyuk nyuk!"

"I like to eat my guppies in bunches! Pop 'em in 10 at a time! That's a big no go for amateurs, though. But do I look like an amateur? No, sir! Down the hatch!" 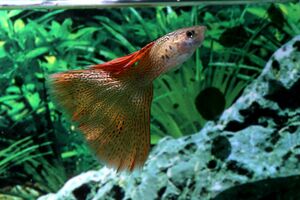 The guppy is one of the most popular freshwater aquarium fish species in the world. It is native to Barbados, Brazil, Guyana, Netherlands Antilles, Trinidad and Tobago, the US Virgin Islands and Venezuela.