The killifish is a freshwater fish in the Animal Crossing series introduced in Doubutsu no Mori+. It can be found in ponds all day from mid spring to late summer.

"I caught a killifish! Killer!"

"I caught a killifish! What's the dilly, fish?"

"I caught a killifish! Bet you feel silly, fish!"

"I caught a killifish! Maybe I'll put it in a chili dish!"

"I caught a killifish! The streams are safe again."

"Hoo hoo! Hullo, little fishy! Aren't we a tiny little fellow! Adorable! Why, I believe it stuck it's tongue out at me! Hoo-rumph! Nevertheless, we'll take care of the little blighter! I'll keep an eye on this mischief-maker myself!"

As with all fish, the Killifish may be given to Blathers as an addition to the museum's aquarium.

"I heard that killifish recipes are common all around the world. Sadly, I've seen nary a one, not that I've searched... I haven't a clue as to their taste, even. It IS a fish, though, I can say that!"

The killifish can be found in the first aquarium tank after being donated.

Upon donating to the museum in Animal Crossing: City Folk, Blathers will say the following dialogue.

"...Hoo, here's a morsel of interest--killifish are often used in observational studies... This is because they are translucent, wot? Indeed, their innards can be seen clearly from without! In earlier times, folks used killifish to discover how a body processed food. Well, suffice to say, the killifish is a marvelous little wonder that gives people a true eyeful!"

It can be found in the left tube tank.

Upon donation to the museum, the information board in front of the tank which houses the killifish reads the following:

"Killifish are small, travel in schools, and are known for having eyes higher up on their faces than others. They swim in shallow areas in rivers and mostly eat bugs that float on the surface of the water. This is why they have mouths as high up their faces as their eyes, making them effective hunters. Being the same temperature as the water they inhabit, getting grabbed by warm hands can shock them."

"Ah, the magnificent killifish! Did you know there are over 1,000 different species? My goodness, what a family tree to keep track of! My own favorite killifish species are the mangrove, which can live on land for weeks, breathing air! And the mummichog, the first fish ever brought to space. I wonder if the killifish you've brought me is related to either of those intrepid explorers?"

Once donated to the museum, the killifish can be found in the small fish tank in the first exhibit room with the goldfish and the pop-eyed goldfish.

During a Fishing Tourney, when given a killifish, Chip will say the following dialogue.

"Listen, the best way to eat killifish is to just swallow them live and a-wriggling! Nyuuuk nyuk nyuk nyuk!"

"I'll tell you something else I'm good at: eating killifish by the bucketful! Definitely not for amateurs, though! ...And with that, down the hatch!" 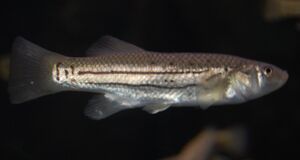 It is unclear what sort of killifish appears in the Animal Crossing series. Judging by the size estimated within the built-in encyclopedia and the Japanese name, it could be a Japanese rice fish. However, all killifish have common traits, noticeably, their translucent skin which has made them an interest in biology due to the visibility of their digestive system. They are a harmless, common, aquarium fish.