"A pearl of wisdom is worth more than a diamond."
— Blathers, Animal Crossing: Happy Home Designer, Welcome amiibo, and New Horizons

Blathers is an owl in the Animal Crossing series who first appeared in Animal Crossing. He is the curator of the museum, accepting donations of fish, bugs, sea creatures, and art. He is knowledgeable, usually giving information on anything donated to the museum. As an owl, he sleeps during the daylight hours, but the player can still donate by talking to him and waking him up. His name comes from blather, meaning voluble talk, referring to his lengthy explanations of items donated to the museum.

Blathers has a sister named Celeste who first appears in Wild World, and later joins him in City Folk, New Leaf, and New Horizons. She works in the museum with him in the former three games.

Artwork of Blathers from Animal Crossing

Blathers is a brown-feathered owl with two pink-colored cheeks and large, feathered eyebrows. He possesses a cream colored face with two large eyes, as well as a checkered chest (similar to an argyle sweater) with a green bow tie. On the sides of his body exist two large wings, which Blathers uses as arms, as well as two talons used as feet.

In Animal Crossing: New Leaf, Blathers is redesigned to have more human-like proportions, such as a larger chest, and longer wings.

Blathers is a dignified, proper individual who speaks in a refined manner. He is knowledgeable on all of the subjects donated to the museum, offering detailed explanations of each and being able to discern real art from forgeries. Blathers has entomophobia, being disgusted when the player donates a bug to him and reluctantly accepting the donation.

Being an owl, Blathers sleeps during daytime, even while tending to the museum, and will always wake up at 6 PM. He can be woken up if the player wishes to talk to him, however.

As a child, he was brought up in the city with his sister Celeste, living in his parent's house. After finishing school, he went on to university, completing a number of degrees until reaching the doctorate level. Before he could complete his studies, he was approached by his professor, who recommended that he take up a post in a country museum, as all the curators of the main Farway Museum refused to move from their posts. Blathers accepted the offer enthusiastically and despite occasional homesickness, he remains at his post. As a result of this move, Blathers still has not finished his doctorate. Blathers is, as confirmed in Wild World, in his mid-twenties.[citation needed]

Blathers and Celeste are siblings who help one another, as Celeste is seen working with Blathers in the Museum, even if they share conflicting interests. Blathers has overacted numerous times to the sight of insects while Celeste was in his presence, leading Blathers to condemn himself and believe himself to be a "substandard" brother to her. Because of this, Blathers sees himself as someone needing to redeem himself to his sister, wondering if he should take her on certain activities that she may enjoy.

Blathers considers Brewster, an employee at his museum, to be somewhat "simple." Blathers has described Brewster to be "entertaining" to him as a result, though he does not mean to insult him, as shown when he struggles to find a right word to describe him. In New Leaf, Blathers describes Brewster as an old friend and allows the mayor to unlock the Roost Café as a public works project.

Blathers has encountered Redd a few times in the past, perhaps explaining his ability to discern real paintings from fake ones.

While Blathers does not appear in Doubutsu no Mori, an early model for him was discovered in a partial source code leak of the game in July 2020, suggesting that he was at one point planned to appear in the game.[1]

Artwork of Blathers from Animal Crossing

"Our main purpose is to provide a place for the exhibition of items we feel have some significant paleontological, artistic, and/or zoological importance, the collection and classification of which..."
— Blathers, Animal Crossing

In Animal Crossing, Blathers is the owner and manager of the town Museum, and during the day can be seen sleeping. When spoken to, Blathers tells the player about a correspondence course in fossil identification that he is participating in (he has expressed wishes of being an archaeologist) which he has not completed, meaning that all fossils have to be sent to the Farway Museum to be identified.

He will also accept fish and bugs, which are shown in the aquarium and insect exhibits, respectively.

In Animal Crossing: Wild World, Blathers has completed his course in fossil identification and can now identify fossils without having to send them to be identified, giving an immediate result. He still continues to accept fish and bugs, but now accepts paintings which are put up in a painting exhibit. If they are forgeries, he will reject them. His sister, Celeste, is also introduced in Wild World, having an office in the attic of the museum. Blathers sometimes talks of his encounters with bugs during his studies. He recalls one time in a library, when he opened a book and maggots fell out. He will also mention his fear of cockroaches when one is donated to the museum. If the player donates a bug that has been donated previously, he will reject it and beg the player to keep the cage closed until the player has left the building.

When fish are donated, Blathers usually talks about how the fish tastes, similar to Chip, the host of the fishing tourney.

In Wild World, on certain days of the year, Blathers will reveal various background information about himself. These days can be determined easily, as he will be awake for all twenty-four hours of those select days. In addition to his consciousness, he will occasionally appear depressed. During these conversations, the player can talk, either choosing to go along with the conversation or to tell Blathers to stop talking.

"This... Upon close perusal, I see this is most certainly NOT the original! It is a vile, shameless forgery!"
— Blathers, Animal Crossing: City Folk

In Animal Crossing: City Folk, Blathers has the same role as he does in Wild World: accepting donations such as fish, insects, fossils and paintings, as well as identifying forgeries. He usually makes jokes and comments on fish and bugs and will bluntly tell the player of his qualification in identifying fossils.

In City Folk, the root of Blathers's disgust of insects is revealed: when he was younger, a mantis egg case ruptured on his writing desk, causing thousands of mantises to fly out. To hear this anecdote, a mantis must be donated to the museum.

In Animal Crossing: New Leaf, Blathers is in the museum again, having the same role as previous games. He can now identify multiple fossils at once, as well as accepting multiple donations at once. However, when the player donates to the museum, he does not talk ('blather') as much as in previous games, stopping himself mid-sentence just before going into a monologue. At some point in the game, Blathers requests a museum renovation as a public works project. When this is built, a second floor was added to the museum, managed by Celeste. Also, after this renovation is made, Blathers will, at some point, request The Roost as a public works project. This building, unlike previous titles, is separate from the museum.

Blathers returns in Animal Crossing: New Horizons. He has the same role like in previous main series games: that of a museum curator. Soon after the player's arrival on the deserted island, Tom Nook will let them know how to craft a bug net and a fishing rod. He will also ask the player to show him any bug or fish specimen caught. Tom Nook will ask the player to give him these specimens because he wants to show them to a friend of his. Once the player has given Tom Nook five different specimens of fish or bugs, Tom Nook will call Blathers on his NookPhone to invite him to come and visit the player's deserted island. He will then turn to the player and ask them to select a spot on the island to raise Blathers' tent.

Blathers will show up in his tent the day after the player has selected a spot for his tent. Once introduced to the player, he will ask for more critters, highlighting the fact that once he has collected a further 15 specimens he will then be able to secure permission to open up a proper museum in order to show them to the public. The feature of Blathers telling the player about their donated items has returned from games prior to Animal Crossing: New Leaf, but unlike in those games, the player is allowed to choose whether they want to hear the explanation or not. The player can also bring him bugs, fish, fossils and sea creatures in order to hear an explanation on them at any time, regardless of whether they have already been donated or not. The art collection retains its reading ability from New Leaf.

Prior to its removal in version 2.0, when the player scans Blathers's amiibo card and tries to invite him, he will say:

Hellooo, this is Blathers. Ah yes, Player! How might I be of assistance?
Hoo-HOO! A campsite, you say?!
While that does sound like fun, I understand campsites are outdoors, and the outdoors...are full of BUGS!
I detest them, you know. The bugs, that is. What's more, I'm up to my wingtips in research.
So while I thank you for the invitation, I'm sorry to say I cannot make it.

Blathers appears in Happy Home Designer when his amiibo card is scanned into the game via the amiibo phone, and will ask the player to build a house for him. Like all Special Characters, he will leave the theme up to the player, and won't request for specific furniture to be in his house. 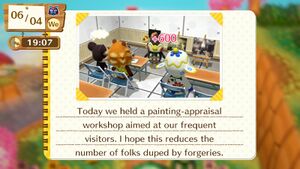 Blathers is one of 15 (16 if Isabelle wearing her summer outfit is counted as a separate character) characters that can be played on the Board Game mode of Animal Crossing: amiibo Festival by using his amiibo figure. He and Celeste have the unique trait of being asleep before their turn if it is not nighttime. He is also playable in the other eight game modes via his amiibo card.

Blathers returns again in Animal Crossing: Pocket Camp, this time as the host of Blathers's Treasure Trek, an activity that allows the player to explore as Blathers to find craft materials by collecting special maps. In addition, Blathers can also be used to unlock certain villagers, similar to Gulliver.

Blathers in the museum in 🎬 Gekijōban Doubutsu no Mori

Blathers appears in the film alongside Celeste in the museum, where they meet Ai for the first time after Ai makes a loud scream after she has unexpectedly seen the fossils in the museum. When Ai speaks to Blathers, he typically begins a lecture on a dinosaur skeleton of a T-Rex, while Celeste is seen taking Ai away to The Roost to complete a delivery task set by Tom Nook.

Blathers, along with Celeste, appears as a trophy and sometimes appear in the background of the Smashville stage. He also appears as a sticker.

Blathers once again appears as a trophy, and as a background character in the stages Smashville, and Town and City. 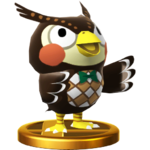 Blathers appears as a spirit in Super Smash Bros. Ultimate.

In Animal Crossing: Happy Home Designer, Blathers will share a house with Celeste.

A pearl of wisdom is worth more than a diamond.

Blathers' RV shares its theme with Celeste's, albeit with a different coloration. 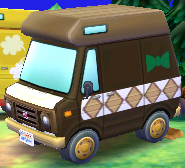 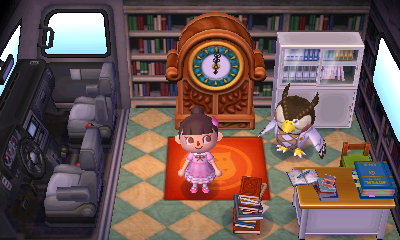 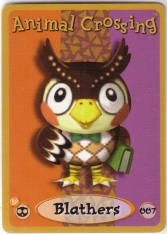 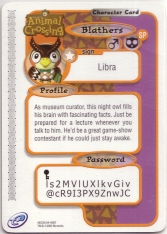 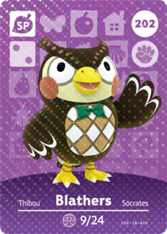 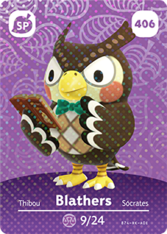