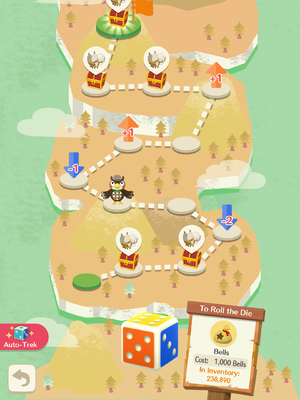 Blathers's Treasure Trek is a minigame in Animal Crossing: Pocket Camp where the player can win items and villagers with the use of maps.

In Blathers's Treasure Trek, the player chooses a map, then Blathers appears on a game board. The player rolls a die to have Blathers move, collecting items along the way. Rolling the die costs a certain amount of an item, and if Blathers makes it to the end of the board, the player wins the item or unlocks the villager on the map. Alternatively, the player can use auto-trek by using the items in their inventory or spend Leaf Tickets to automatically clear the board.

The following is a list of the various different maps the player can obtain.

The following villagers can be unlocked in Blathers's Treasure Trek:

Teddy's map can only be obtained as a gift after receiving the very first map and clicking on Blathers.)