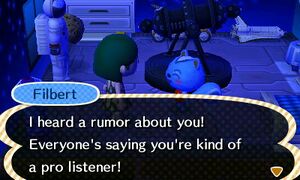 The player gaining a reputation in New Leaf.

Reputation (conjectural name[nb 1]) is a mechanic in Animal Crossing: City Folk and Animal Crossing: New Leaf that keeps track of actions that a player does in the game. When completing an activity a high number of times, the player will develop a reputation amongst the villagers in town for that action, bestowing a unique title upon them. While villagers spread rumors about it amongst themselves, they will occasionally pass it along to the player in order to inform them of their reputation.

Several reputations in City Folk can be gained by simply wearing certain clothing or accessories regularly. Others require in-game actions to completed many times before they can be gained.

New Leaf introduces many more reputations, but almost all of them can now only be gained from completing in-game activities many times.