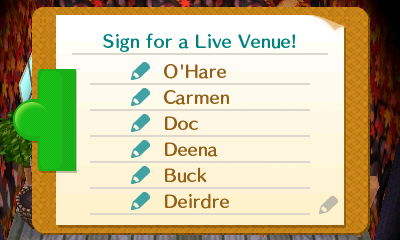 Petitions are a game mechanic in Animal Crossing: New Leaf that require the player to gather signatures by talking to different villagers. One petition is given to fill out by Dr. Shrunk, while others may be handed out by different villagers living in town. If the deadline for a villager's petition has passed, the player has the option to throw the petition sheet after talking to the villager as it becomes a junk item.

After the mayor character has achieved 100% approval rating and unlocked T&T Mart, Dr. Shrunk will appear at their door asking for permission to open a live venue on Main Street. He will hand the player a petition form, which the player has to take to six different villagers living in town to sign. After the petition is filled and returned to Dr. Shrunk, Club LOL will open in the next five days. If the player rejects Dr. Shrunk's petition, they can get it from Isabelle later by selecting Club LOL from the list of Public Works Projects.

Various villagers may also hand a player character a petition to fill out. But unlike Dr. Shrunk's, theirs will require signatures from the villagers of other towns, meaning the player has to travel to fill them out. Also unlike Dr. Shrunk's, villagers' petitions have no impact on the game if completed other than a personal reward for the player. If the player manages to collect six signatures from out of town by the end of the day and return it, the villager will thank them and give them some form of reward, which is sometimes the villager's picture. If not, the villager will tell them the next day that they'd already submitted the signatures they already had.

Among petitions the player may receive from villagers are the following: