T&T Mart is a store in Animal Crossing: New Leaf owned by Timmy and Tommy. It is the second incarnation of the Nooklings' store, and it appears on Main Street. T&T Mart is similar in appearance to Nook 'n' Go from Animal Crossing, Wild World, and City Folk. The store features more items than its previous incarnation, the Nookling Junction, and features the Timmy & Tommy shopping catalog, where the player can view and purchase previously obtained items.

Once T&T Mart opens, Dr. Shrunk appears outside the player's house to request signatures for the opening of Club LOL. 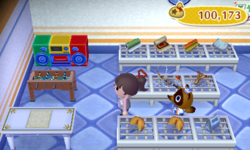 The inside of T&T Mart

T&T Mart sells thirteen items each day, including three furniture items, one wallpaper, one flooring, one Wrapping Paper, one pack of stationery, three tools, two Fortune Cookies, and one Medicine. During certain events the Fortune Cookie will be replaced with event-themed items, such as Fireworks Fountains or Candy.