Snowtyke is a snowperson in Animal Crossing: New Leaf. He can be built by the player by rolling two snowballs together. Once built, he will mail the player unique winter-themed items if the three other snowpeople—Snowboy, Snowman, and Snowmam—are built.

Snowtykes are snowfolk, sharing the same appearances with their families. The only difference is that they have orangish-yellow noses with orange linings. They are also the shortest snowfolk.

Snowtykes are always grateful to anyone who builds them, a trait they share with their families. They also love their elder family members. 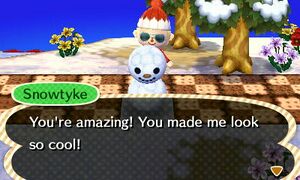 A Snowtyke after being built in New Leaf.

As with other snowpeople, a Snowtyke can be built from December 11 to February 25, and he is the smallest of the snowpeople. If built perfectly, he will wish to see his mother, father, and brother (Snowmam, Snowman, and Snowboy). After the other three snowpeople are built, he will thank the player with a letter and a unique winter-themed item.

Snowtyke, alongside Snowman, Snowmam, and Snowboy, appears as a trophy in Super Smash Bros. for Nintendo 3DS.

This page could be improved with the addition of images.
You can help by uploading one or more images and including them on this page.
Retrieved from "https://nookipedia.com/w/index.php?title=Snowtyke&oldid=1066550"
Categories:
Hidden categories: