Not to be confused with Snowman.

Snowmam is a snowperson in Animal Crossing: New Leaf. She is made by stacking a small-sized snowball onto a medium-sized snowball. Once built, she asks the player to catch Snowflakes with a net and will give them an item from the Ice Series in exchange.

Snowmams are snowfolk, sharing the same appearances with their families. The only differences are that they have yellowish-orange noses shaped like rectangles, they wear red lipstick, they have eyebrows shaped like tear/water drops, and they have extra smaller snowballs on top of their heads as hair buns.

Snowmams are always grateful to anyone who builds them, a trait they share with their families. They also like Snowflakes. 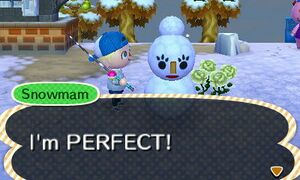 As with other snowpeople, Snowmam can be built from December 11 to February 25, and she is the second-largest snowperson—smaller than than Snowman and larger than Snowboy. A perfectly built Snowmam will ask the player to catch three Snowflakes, while a slightly imperfect one will ask for five. Her offer lasts until she has been fully melted, and it extends to all residents and visitors to a town. If the player speaks to her with an insufficient number of Snowflakes, she will offer to take them from the player, albeit with no reward. Poorly built Snowmams will be mad at the player for forming them that way, but can be spoken to and have unique dialogue that properly built ones do not. A Snowmam has the same voice as a snooty villager.

Snowmam, alongside Snowman, Snowboy, and Snowtyke from Animal Crossing: New Leaf, appears as a trophy in Super Smash Bros. for Nintendo 3DS.

This page could be improved with the addition of images.
You can help by uploading one or more images and including them on this page.
Retrieved from "https://nookipedia.com/w/index.php?title=Snowmam&oldid=1066524"
Categories:
Hidden category: