"Oh, good! K... Here you go! Silver axes are pretty nice, too. Definitely up there in the whole precious-metal-axe scene. See how it cuts for yourself! B'bye, now!"
— Serena, Animal Crossing: City Folk

Serena is a goddess dog in Animal Crossing: City Folk who appears in the town's fountain. She is the source of both the silver axe and the golden axe.

Serena is a white Chihuahua with a white dress. She has large beady eyes and wears golden jewelry. On her head, she wears a veil, and also has large pointed ears in front. 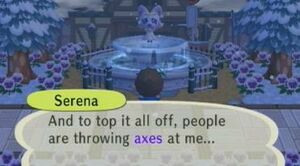 Serena in the fountain in Animal Crossing: City Folk.

In Animal Crossing: City Folk, Serena appears in the town fountain if the player throws an axe into it; this is done by swinging the Wii Remote or pressing while holding an axe. Serena will ask the player a series of questions, including, but not limited to, "Which axe did you throw?", "How do I look today?", "Did I seem goddessy?", and "Do you really not like me?", before asking them to choose her left or right hand. After the player answers the questions, Serena will either give them a silver axe, give a golden axe, return the standard axe, or give nothing, keeping the standard axe. The answers the player gives to her questions have no effect on the outcome. Sometimes, Serena won't ask any questions and will keep the axe the player threw.

This interaction is a reference to the fable The Honest Woodcutter, where a man drops his axe into a river and a god appears, asking him if he dropped a golden or silver axe. The man answers neither, and impressed by his honesty, the god gives him all three axes.

Serena also appears as a statue on the fountain in the city.

Although Serena does not appear in Animal Crossing: New Leaf, peppy villagers may reference her and City Folk's method of obtaining the silver axe and golden axe in conversation. They will ask, "if you dropped an axe in a magic pool, <Player>...and a goddess appeared and she said she'd transform it for you, which one would you choose?"

In Super Smash Bros. for Wii U, Serena appears as a spectator in the Town and City stage and as a collectible trophy. Her appearance in this game omits the earrings she wears in City Folk. 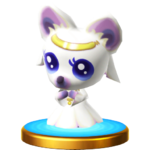 Serena appears as a spirit in Super Smash Bros. Ultimate.