For more information about this game, see its corresponding article on SmashWiki.

All previous playable Super Smash Bros. characters, including Villager, return in this installment, alongside numerous newcomers, including Isabelle. Seven new stages are in the game, with more being added via DLC. In addition to this, over 90 past stages from previous games return as well, including Smashville, Tortimer Island, and Town and City.

Panorama of the roster featured in Super Smash Bros. Ultimate 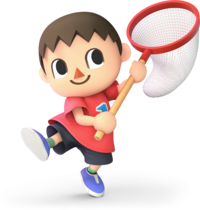 Villager returns from their appearance in Super Smash Bros. for Nintendo 3DS / Wii U as with every previous fighter from the Super Smash Bros. series, with changes made in their expressions and color appearance. They can now see what item they pocketed from using their neutral move. Two of their alternate costumes have also changed, as their last two alternate costumes now feature darker skin, unlike the previous titles.

Besides these appearance changes, Villager remains mostly the same from their appearance in Super Smash Bros. for Nintendo 3DS / Wii U, with minor buffs and nerfs. Villager is classified as Fighter #45.

Isabelle is a new fighter introduced in Super Smash Bros. Ultimate, having been upgraded from Assist Trophy status from Super Smash Bros. for Nintendo 3DS / Wii U. She is a semi-clone of Villager, but is not classified as an Echo Fighters, the term used to described clones in Ultimate. Although her Final Smash and neutral special function identical to that of Villager, her other moves do not.

Other aspects of Isabelle have been modified to differentiate herself from Villager. Her neutral attack uses a Toy Hammer to hit her opponents. Her forward smash fires a Party Popper and her up smash summons a Do-not-enter Sign.

Although Isabelle speaks Animalese in her reveal trailer, she is completely mute in this game. Isabelle is classified as Fighter #68.

Smashville, Tortimer Island, and Town and City all make a reappearance in this installment. All stages are now able to be turned into Battlefield and Ω forms. These forms turn the stage's geometry into that of Battlefield and Final Destination respectively. A function that turns off stage hazards is also present, which changes some of the properties of most stages, including all of the Animal Crossing stages.

The Beehive and Pitfall seed make their return from the previous installment. The fruit that grows on Tortimer Island and the wood chip produced from Villager's down special also return.

Additionally, Kapp'n is one of the many new additions to the roster of characters that appear as an Assist Trophy. When summoned, he will get in his bus and drive across the stage, occasionally jumping up into the air. Kapp'n will pick up any fighters that get in his way, and take them past the blast lines, resulting in a K.O.

As with Brawl and Smash 4, K.K. Slider will perform from 8 PM to midnight on Smashville and Town and City, playing each of the following tracks.

Super Smash Bros. Ultimate received periodic updates throughout its lifespan, adding new fighters, stages, music and spirits to the game (as part of DLC), as well as any features and balance changes. Villager and Isabelle received various changes to their damage input and gameplay. They have also received bug fixes to their gameplay, such as a glitch where Villager's slingshot bullet, if pocketed continuously between another Villager or Isabelle, will eventually cause the game to crash.

Online multiplayer for arenas, tourneys, and gameplay match-ups can only be done if the most recent update is installed.