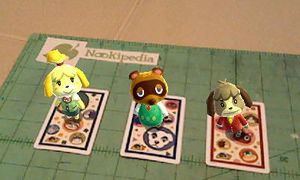 Gameplay of Photos with Animal Crossing

Photos with Animal Crossing requires the use of the rear cameras of the Nintendo 3DS to scan AR cards. The Start "?" AR card image, which is usually included with all Nintendo 3DS console packs and bundles, and three Animal Crossing-themed ones released for the app, are compatible. When recognized, the Animal Crossing AR cards trigger an augmented reality appearance of one of five included special characters per image, whilst the Start "?" image reveals the Town Tree. The characters can interact with each other and the Town Tree in various ways. If all three cards are present at once, there is a chance of DJ KK appearing in place of K.K. Slider. Photos can be taken with the R button at any time, and they are save to the console's SD card and can be viewed via the built-in Nintendo 3DS Camera app.

Additionally, the user can add one of four effects to the screen by using the D-pad: up causes confetti to appear, right causes bubbles to appear, down causes shooting stars to appear, and left causes snow to appear. When a card is recognized, the player can grab characters with the L button, change the position of the light source or color of the light with the Circle Pad, or mirror the camera's image horizontally. The face buttons start a timer, which automatically takes a photo when expired; A creates a 3-second timer, B creates a 5-second timer, Y creates a 10-second timer, and X creates a timer of a random length. 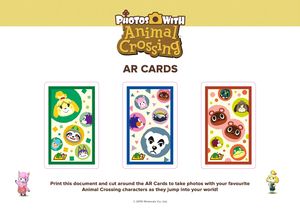 The three AR cards released for Photos with Animal Crossing

There are three augmented reality (AR) images made for the app, and each image triggers the appearance of five characters (six characters if the Nooklings are counted separately) in a certain order one at a time or all at once, depending on the situation and availability of AR within the scope of the Nintendo 3DS camera lens. The following characters appear per image:

Photos with Animal Crossing is available through the Nintendo eShop in Japan, but it was exclusive to download codes in Europe. During the Hyper Japan Festival in July 2015, an annual expo held at the O2 arena in London, Nintendo UK hosted a promotion where a limited amount of download codes were freely distributed to visitors.[3] The same promotion was held at Gamescom in August 2015,[4] the largest gaming event held annually in Germany. 5,000 additional codes were later distributed by Nintendo UK in September 2015 through Nintendo Life, a UK-based Nintendo news publishing website.[5] Nintendo UK sent out codes to users subscribed to the Nintendo Newsletter.[6] Select McDonald's in Germany distributed AR cards from August 10, 2014, to August 24, 2014.[7]