This article is about the Wii U application. For the location in New Leaf and New Horizons, see Plaza.

The app takes place in an area based on the WaraWara Plaza from the Wii U Home Menu and themed after the event plaza from Animal Crossing: New Leaf. From the plaza, players could post to the Animal Crossing Series Community on Miiverse.

An update for Animal Crossing Plaza was released on November 14, 2013,[1] which added polls, the ability to mark villagers as residents, Miiverse stamps, improvements to the album, and additional dialog.

Animal Crossing Plaza was removed from the Nintendo eShop on December 22, 2014,[2] although it can still be accessed for those who previously downloaded it, and Miiverse posts could still be made from the app until Miiverse was discontinued on November 7, 2017.

Animal Crossing Plaza was announced in a Nintendo Direct on August 7, 2013 and released immediately after the presentation. The app was introduced in a segment mimicking the startup sequence of Animal Crossing: New Leaf, with Isabelle telling the viewer about the app and respective Miiverse communities before then-president of Nintendo Satoru Iwata explained it further.[3]

Two days after Animal Crossing Plaza's release, on August 9, 2013, the shaved-ice lamp furniture item in Animal Crossing: New Leaf was distributed via SpotPass in North America to promote the app. Unlike other distributed items, which were accessed from the post office and given to the player by Pelly or Phyllis, the shaved-ice lamp was sent in the following letter from Isabelle:

From your assistant, Isabelle

The update for Animal Crossing Plaza was announced in a Nintendo Direct on November 13, 2013 and released the next day.[4] 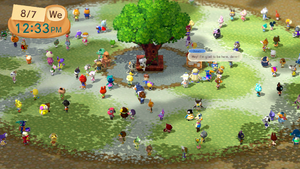 Animal Crossing Plaza takes place in a large plaza with a Town Tree in the center. When the game is loaded, the player's Mii and Isabelle appear near the Town Tree before the camera zooms out and a random selection of several dozen villagers and special characters rush into the plaza. After the characters rush in, they walk around the plaza and occasionally talk. The player can pan the camera around the plaza by moving the left Control Stick or dragging on the GamePad touch screen, and set it to one of four zoom levels with the right Control Stick or buttons in the bottom-left corner of the GamePad screen. 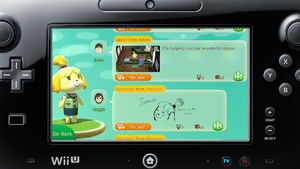 Various Miiverse posts about Isabelle shown on her profile 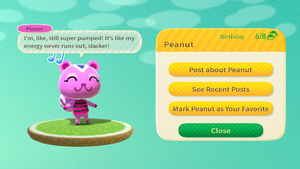 All 333 of Animal Crossing: New Leaf's villagers, as well as 52 of its special characters—not including Lloid, who only appears to direct the player to the Animal Crossing Series Community on Miiverse and has no dialog—are included in the app.

One to two characters at a time briefly display a dialog above their head when viewing the plaza. Each villager personality and each individual special character has several strings of dialog that are chosen from at random, with some being based on the time of day or year. Additional dialog was added in the November 2013 update.

A character can be tapped on from the GamePad. This switches the GamePad view to a profile of that character, who cycles between different dialogs and shows various emotions. When in this view, the character's birthday and ranking in the latest poll are shown. The player can mark them as their favorite character and could make a Miiverse post about them to the Animal Crossing Series Community or view recent posts about them. Moving the Control Stick rotates the character; this cannot be done for Zipper T. Bunny beginning in the November 2013 update, as he will fight against the movement so that his backside cannot be seen. 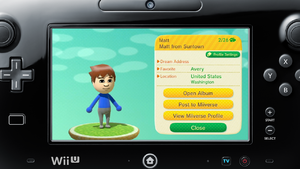 The player can tap on their Mii to view their profile, including the following information about them, which was also shared with others on Miiverse:

The player could also post to Miiverse and view their Miiverse profile from here.

A screenshot in a player's album

From their profile, the player can access photo albums which screenshots from Animal Crossing: New Leaf can be uploaded to from an SD card. There are 12 albums, each of which can be named, and each album can hold up to 240 screenshots. Any uploaded screenshots could be posted to Miiverse. 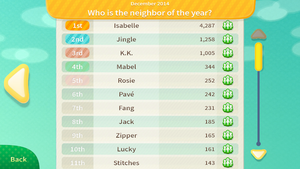 The rankings for the final poll in December 2014

Beginning in the November 2013 update, there were monthly questions that asked players to vote on a character. Polls were held until the end of 2014. Players could vote for a character from their profile, as well as view that character's result in the most recent poll.

The rankings for all 385 characters for each poll can be viewed from the bulletin board while connected to the internet, and they can still be accessed as of December 2022. Isabelle received the most votes in every poll by a wide margin.

Below is a list of the polls and the top five most-voted characters:

Like the main series Animal Crossing games, Animal Crossing Plaza utilizes the system's clock. The current date, weekday, and time are displayed in the top-left corner of the screen. The clock mainly affects the dialog of the characters, with certain characters mentioning current or upcoming events, the current time of day, or the current day of the week. Additionally, a bell plays at each hour, similar to the town tune in the main series games. Unlike in the main series games, there is no day/night cycle or seasons and the environment remains constant throughout the day and year.

There is a single music track in Animal Crossing Plaza that plays at all times. It interpolates parts of the title theme of Animal Crossing: New Leaf. If the camera is zoomed in toward K.K. Slider, an extra guitar is mixed into the track. Beginning in the November 2013 update, if the camera is zoomed in toward Zipper T. Bunny or Pavé, extra instruments from the Bunny Day and Festivale themes, respectively, are mixed into the track.