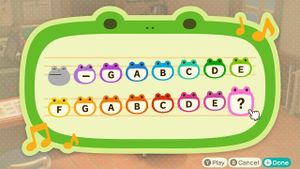 The layout of a town tune, as seen in Animal Crossing: New Horizons. Given its simplistic nature, there are no sharps or flats on normal notes.

The town tune (formatted as Town Tune in Animal Crossing and known as the island tune in New Horizons) is a melody that plays in the player's town. It is customizable and can contain one to sixteen notes.

Town tunes are played in the following situations

In Doubutsu no Mori, Animal Crossing, and Doubutsu no Mori e+, the Town Tune is customized via a board outside the post office. On the board, the player has the option to scan a Town Tune e-Reader card, which will produce a tune based on the one on the K.K. Slider song on the scanned card. Villagers may ask the player to change the Town Tune, with some complaining about its quality.

The default Town Tune differs between Animal Crossing and Doubutsu no Mori e+. 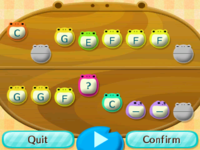 In Animal Crossing: New Leaf, the town tune is customized in Town Hall by speaking to Isabelle. Once the player creates a tune, Isabelle will preview it by singing it.

There are four possible default town tunes in New Leaf. 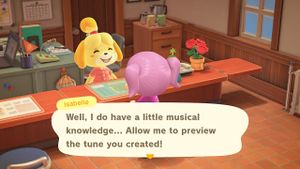 In Animal Crossing: New Horizons, the island tune does not play until Resident Services is upgraded to a building. Once the upgrade occurs, the tune can be customized by speaking to Isabelle. Like in New Leaf, she will sing the chosen tune upon its creation.

These are the default melodies for the town tune throughout the series. Each game features a variation of the same basic tune.

These tunes can be found on the back of music cards in each Animal Crossing-e series. Each one is based on a song by K.K. Slider.