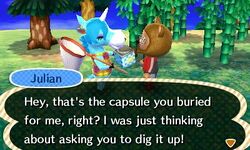 Julian receiving his time capsule from the player.

Time capsules are items in Animal Crossing: New Leaf that are given to the player by villagers as part of a favor; they are stored with the player's letters. The villager will ask the player to bury it; after it is buried, it will disappear until the villager asks for it to be dug up.

If the player digs up a time capsule in another town, they will re-bury it, saying "[...] it was probably buried by someone who lives in this town. I'll put it back where I found it."