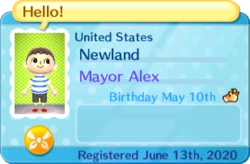 A player's Town Pass Card, accessed through the bottom-screen menu.

A Town Pass Card (abbreviated as TPC) is a player identification card in Animal Crossing: New Leaf. Isabelle issues the player their own TPC after they obtain a house in the town from Tom Nook.

The TPC displays a player's name and town, their photo, catchphrase, and personal information such as the player's date-of-birth, gender, and geographical location. The player can generate a photo for the TPC using the photo booth on Main Street. A photo is required before interacting with other players online.

The player's TPC is accessible by tapping the player menu on the touch-screen display. During multiplayer, a list of players in the town can be viewed by selecting a button in the lower-left corner of the screen. A TPC icon will appear beside the name of each player, and tapping the icon will display that player's TPC. It is also possible to view the TPCs of players in the Happy Home Showcase.

In Animal Crossing: New Leaf - Welcome amiibo, the TPC becomes a submenu, with a new submenu displaying town initiatives. A third submenu, the Census, exists in data but is disabled. The Census displays statistics about the player and the town. An incomplete version of the menu can be forced to appear in-game through save editing.

After acquiring the TPC, the player can access it by selecting the red tab in the bottom screen.

The front side of the card shows:

In multiplayer, any player can see each other's TPC. The player's subregion is not visible if the one viewing does not share the player's country, and their Dream Address can be hidden if the player told Luna to do so.