Favors are requests from villagers. They might ask for items, such as fish, bugs and furniture, or ask the player to deliver presents and letters. Quests such as retrieving a villager's key or lost item also count as favors. Completing a favor will earn the player a small reward, such as 500 Bells or a furniture item. 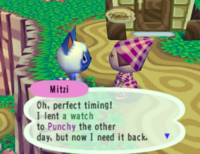 Players can request favors from villagers in Animal Crossing. The option will be something such as, "Need help?" or "Can I have a job?" The villager will often have something for the player to do, but there is not a guarantee that they will. Asking for a favor and then refusing the task offered may make the villager angry. One type of job is a delivery, where a villager asks the player to retrieve a unique item from another villager. These items do not appear anywhere else in the game.

In Animal Crossing: Wild World, favors are linked to villager hobbies. Usually, the task that the player is given is linked to the villager's hobby, so a furniture hobby will be accompanied by requests for furniture. Villagers with the walking or seashell-collecting hobbies, as well as those who are 'in between' hobbies, may ask the player to undertake deliveries. Completing several favors in succession for a villager increases their chances of packing their boxes to move away.

In City Folk and New Leaf[edit] 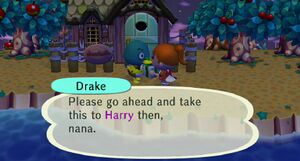 Favors are given somewhat randomly in Animal Crossing: City Folk and Animal Crossing: New Leaf. If the player's pockets are full when they complete a favor, their reward will be mailed to them. Also, refusing a favor can make a villager depressed for a short time. In New Leaf, most favors can be done until 6 AM the next day or whenever the villager that requested it goes to sleep. However, if a villager asks for a favor late at night, they will allow the player to do it the next day. This allows the player to do a favor later if a villager is asleep.

In Animal Crossing: New Horizons, favors work almost the same way as in Animal Crossing: New Leaf, except they can be done until 5 AM the next day or whenever the requesting villager goes to sleep. There is also the option to do it the next day if it is late at night. In addition, whenever the player accepts the favor, the villager cannot talk about other subjects until the favor is completed; only to remind the player what must be completed.