Bugs, also known as insects, are collectible creatures in the Animal Crossing series that can be caught with a Net. They can be donated to the museum (much to the dismay of Blathers), sold, placed in the player's home as a piece of furniture, or, only in New Horizons, given to Flick to create models. Bugs can be found in various locations, including on and inside trees, on the ground, flying, on tree stumps, on flowers, on and underneath rocks, and on freshwater. Most bugs will be scared away if the player gets too close to them, with certain bugs (most notably rarer bugs) being scared away much more easily, requiring the player to slowly approach them with their net.

A large amount of bugs will only emerge during the summer months, and there are very few during the winter months. The most valuable bugs are the Giraffe Stag, Golden Stag, and Horned Hercules, which each sell for 12,000 Bells in Animal Crossing: New Horizons. In all Animal Crossing games, if the player catches every bug, they will receive a Golden Net, which has a larger radius than the regular net, allowing bugs to be caught more easily. 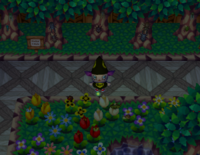 Eight more bugs were introduced in Animal Crossing, making for a total of 40. Bugs new to the series include the Ant, Bagworm, Mosquito, Mole Cricket, Pill Bug, Pond Skater (later known as the Pondskater), Snail, and Spider. Additionally, bugs can now be donated to the museum. If the player catches all 40 bugs, they will be gifted a Golden Net by Tortimer and a butterfly ornament will appear on their house.

Nineteen more bugs make their first appearance in Animal Crossing: Wild World, while eleven do not return from Doubutsu no Mori e+, making for a total of 56. Bugs new to the series include the Agrias Butterfly, Atlas Beetle (later known as the Horned Atlas), Elephant Beetle (later known as the Horned Elephant), Emperor Butterfly, Fly, Fruit Beetle, Goliath Beetle, Honeybee, Lantern Fly, Monarch Butterfly, Moth, Oak Silk Moth, Peacock Butterfly, Rainbow Stag, Scarab Beetle, Scorpion, Tarantula, and Walkingstick (later known as the Walking Stick). Bugs that did not return from the previous game include the Bagworm, Common Dragonfly, Coconut Crab, Crab, Diving Beetle, Drone Beetle, Hermit Crab, Ladybug (although the Spotted Ladybug returns and is renamed to Ladybug), Mountain Beetle, Pine Cricket, and Purple Butterfly. Additionally, Alexandra's Swallowtail Butterfly has been renamed to Birdwing Butterfly, and the Flat Stag Beetle has been renamed simply to Stag Beetle. If the player catches all 56 bugs, they will be mailed a letter containing the Golden Net.

Eight more bugs make their debut in Animal Crossing: City Folk, with two not returning from Wild World and two returning from Doubutsu no Mori e+, making for a total of 64. Bugs new to the series include the Centipede, Cyclommatus (later known as the Cyclommatus Stag), Golden Stag, Miyama Stag, Petaltail Dragonfly, Raja Brooke Butterfly (later known as the Rajah Brooke's Birdwing), Violin Beetle, and Walking Leaf. The Bagworm and Diving Beetle return after being absent from Wild World, while the Cockroach and Stag Beetle do not return from Wild World. Like in the previous game, if the player catches all 64 bugs, they will be mailed a letter containing the Golden Net.

All 64 bugs from City Folk return in Animal Crossing: New Leaf, along with seven new bugs, and one, the Hermit Crab, returning from Doubutsu no Mori e+, making for a total of 72 bugs. The bugs introduced in New Leaf are the Cicada Shell, Giant Cicada, Rice Grasshopper, Stinkbug, Tiger Beetle, and Wharf Roach. Additionally, the Atlas Beetle has been renamed to Horned Atlas, the Cyclommatus to Cyclommatus Stag, the Elephant Beetle to Horned Elephant, the Hercules Beetle to Horned Hercules, and the Walkingstick to Walking Stick.

The Bug-Off once again returns and is identical to City Folk aside from new prizes, items from the Insect Set. If the player speaks to Nat during a Bug-Off after catching all 72 bugs, he will reward them with the Golden Net.

Animal Crossing: New Horizons introduces eleven new bugs to the series, with five not returning from New Leaf and one, the Purple Butterfly (renamed to Great Purple Emperor) returning from Doubutsu no Mori e+, for a total of 80 bugs. Bugs new to the series include the Atlas Moth, Blue Weevil Beetle, Damselfly, Earth-Boring Dung Beetle, Giant Water Bug, Giraffe Stag, Madagascan Sunset Moth, Man-Faced Stink Bug, Paper Kite Butterfly, Rosalia Batesi Beetle. The bugs that have not returned from New Leaf are the Fruit Beetle, House Centipede, Lantern Fly, Oak Silk Moth, and Petaltial Dragonfly. Additionally, the Bee has been renamed to Wasp, the Birdwing Butterfly to Queen Alexandra's Birdwing, and Rajah Brooke Butterfly to Rajah Brooke's Birdwing. If the player catches all 80 bugs, they will be sent a letter from the Farway Museum containing the Golden Net DIY recipe.