The firefly is a bug in the Animal Crossing series that appears in all games to date except Animal Crossing: Pocket Camp. It can be found flying from 7 PM to 4 AM during the first month of summer, occasionally glowing.

In the first-generation games and Wild World, the firefly appears simply as a glowing ball. Beginning in City Folk, it has a unique model.

"Whoa! A firefly! I caught a firefly! Yow! They're really hot!"

"Whoo! I caught a firefly! Now I don't need a flashlight!"

"I caught a firefly! Now I'm glowing with pride!"

As with all insects in the Animal Crossing series, the firefly can be donated to the museum followed by a small talk by Blathers, the curator.

"I must admit that a night sky filled with whirling fireflies is quite charming. It fills me with a sense of peace... But...why do their strange, magical bums glow? To be quite honest, it's positively indecent! Hooo... But I digress..."

"I've heard tales of children unable to buy candles... Yes, these unfortunate souls are said to have studied by firefly light! Ugh. The mere thought of having a bug that close... Blech! So very vile... I'd rather read in darkness!"

The firefly can be found hovering over the pond in the first room of the bug exhibit.

"Many theories exist as to why fireflies can glow, but we've yet to find a clear answer, eh wot? The answer is not nearly so relevant as the fact they are bugs, and therefore wretched."

It can be found hovering over the small pond to the bottom-left in the bottom terrace, occasionally.

After being donated to the museum, the Firefly can be found periodically hovering over a small pond in the first room of the insect exhibit. The exhibit says the following:

"Both male and female fireflies are capable of producing light from their lower abdomens. This light isn't the same as the light from a lightbulb, though, and isn't hot when you touch it. Fireflies can actually glow when in the egg and larval stages, but that light is comparatively weaker."

"The firefly isn't a fly at all! It is a beetle, you see--and one known for its ghastly glowing backside. This light is called "bioluminescence" and it is caused by...by...a chemical reaction in the rump. Males flash about in the night sky to attract females, while their larvae turn on the glow to put off predators. Speaking of their yucky young, firefly larvae love to dine on snails! Hoo Ewwww!"

After being donated, fireflies can be found hovering above the pond that surrounds the "quiet bench" area in the main bug exhibit. 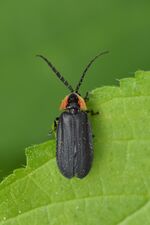 The lampyridae, colloquially known as the firefly or lightning bug, is an insect most notable for its bioluminescence. In this regard it is similar to the jellyfish. Oddly enough, there are many species that do not produce light at all.