The Spider is a bug in the Animal Crossing series introduced in Animal Crossing. They are uncommon and can be found in trees from spring to fall, appearing for a few seconds hanging from a web when the player shakes the tree.

"Whoa! I caught a spider! I bet some fly is gonna rest easy tonight!"

"I caught a spider! Look at all those eyes!"

"I caught a spider! My net is kinda like a web, right?"

As with all bugs in the Animal Crossing series, the Spider can be donated to the museum. Every donation is followed by a small talk from Blathers, the curator;

"Hanging a toy spider from a string to frighten someone is a jolly good childhood ruse known throughout the world. Now, I may be mistaken, but I believe this shows the general loathing civilized folk have for spiders. They deserve it! Eight legs, bug diet, and those eyes! They just have too many! Blech! Sinister fiends! Hooo... But I digress..."

"I can think of nothing more repugnant than becoming entangled in a spider's web! After thrashing about, you think you got it all off, but no, indeed! A little tickle on your neck and you thrash anew! Blech! Such foulness... Hoo... But I digress..."

The Spider is displayed in the second room of the insect exhibit, on the second tree from the bottom at the far end. It is seen descending from its hiding place in the leaves of the tree on a spider silk, waiting a while, and then scrabbling back up again. 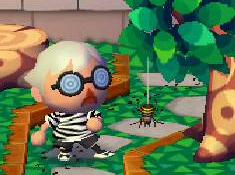 A Spider in the museum in City Folk.

"Horrors! My apologies, but I get rather jumpy around fast, multi-legged critters like this one, eh wot? Even worse is the fact that spiders have eight eyes! Even when it looks away, it can see our every move! I've heard some people worship the spider... And I've also heard that you will not find me in those places."

After donating, the Spider can be found on a tree in the central terrace of the insect exhibit. It will come down out of the tree on a thread when approached.

Upon being donated, the Spider can be found in the room of the bug exhibit with the Rafflesia, on the middle tree of the northern terrace. It will come down out of the tree on a thread when approached. The exhibit has this to say about the Spider:

"Spiders emit silk from their spinnerets and use it to create elaborate webs to snag prey. The horizontal threads are sticky to the touch, allowing them to be used as very strong restraints. However, the vertical threads are smooth, allowing spiders to walk on them without getting stuck."

"The spider is renowned for having eight eyes and eight legs... WHICH IS TOO MANY, I SAY! Oh dear. I do apologize. Now where was I? Most spiders are carnivorous. In fact, some will eat creatures several times larger than themselves. To catch their prey, many of these ruthless predators spin sticky webs of surprising strength. Worse yet, they've also been known to ambush their victims, and some even chase down their meals! All this talk about the feeding habits of spiders... I'm feeling quite queasy. Hoot! The Horror!" 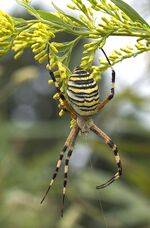 Argiope bruennichi, commonly known as the wasp spider, is a widespread species of spider that can be found in Europe, Africa and much of Asia. Their common name refers to the black and yellow stripes they have on their abdomens.