This article is about the stinging variety found in trees. For the smaller and harmless variety found near flowers, see Honeybee.

The Wasp (known as the Bee prior to New Horizons)[nb 1] is a bug in the Animal Crossing series that has appeared in every game to date. It can be found at any time of the day or year, and is one of the many harmful bugs in the series, alongside the Tarantula and the Scorpion. If multiplayer is active or the player's gates are open, harmful bugs, including Wasps, will not appear.

In the games that the Wasp appears in, it is only found when a Wasp Nest drops when shaking a tree on some occasions. When this occurs, Wasps will chase after the player and sting them if not caught in time. A player cannot attempt to sit on a chair or lay on a bed while being chased by Wasps. The player can use a Party Popper to scatter the Wasps away. Wasps will temporarily stop chasing the player and circle around if the player is talking to a villager or special character, looking at their pockets or phone, looking at their emotes, or being underneath an arch. If a Wasp Nest falls from a tree and the player goes to talk to a villager, the villager will notice the wasps in the air and say something in fear such as, "Get away from me!"

If stung, the player's left eye swells. In Animal Crossing: New Horizons, if the player is stung by another wasp while still swollen, they will pass out and be returned to the front of their house. If they are on a Mystery Island or on Kapp'n's boat tour islands and they are stung twice, they will return to the front of the island. The player can be healed with medicine, given by other villagers, brought for

1,200 Bells in Doubutsu no Mori e+), or made by crafting (only in New Horizons). The player could also save and end their game to remove the swelled eye, though this is not possible in New Horizons. Villagers will remark on the stung player's appearance, with normal villagers reacting in fright or concern and snooty villagers chiding the player for that attack (adding insult to injury); while cranky villagers can outright laugh at the player. In New Horizons, if the player wears a certain type of glasses while stung, villagers will not comment on the sting.

"OWWWW! I got stung by a bee..."
— The player after being stung by Bees, Animal Crossing

"I got stung by BEES! Ow! Ow ow ow ow!"
— The player after being stung by Bees, Animal Crossing: Wild World

"I got stung by a bee! Ow! Ow ow ow!"
— The player after being stung by Bees, Animal Crossing: City Folk

"Ow! Ow ow ow... I got stung by bees!"
— The player after being stung by Bees, Animal Crossing: New Leaf

"Why, I'd imagine it took more than a bit of skill and daring to catch bees! You've got 'moxie,' as I believe they say. I'm certain you must have been stung numerous times. How terribly painful that must have been, eh wot? Incidentally, do you know how some honeybees protect their hives when attacked by giant wasps? The giant wasps can't survive heats above 113 degrees, but the honeybees can live at heats up to 122 degrees. The canny honeybees use this nine-degree difference to their fullest advantage, wot! When the wasps arrive, the bees attack them en masse. A single wasp may be swarmed by up to 500 bees! Now this is truly amazing. The bees then begin to vibrate, creating a veritable cocoon of suffocating heat. Do you see the genius at work here? This swarming is but a feverish defense against the giant wasps' weakness. The temperature? Hoo hoo! Lo and behold, 120 degrees! Just below the bees own threshold of survival! In this incredible fashion, the honeybees literally lay their lives on the line to protect the hive. Stupendous! To be honest, I learned that from a wee documentary I saw on the telly! Of course, incredible feats go only so far. When all is said and done, they're still insects, and still ghastly!"

"I once thought that its stinger was a bee's lone defense, but...

Of course, the gent who told me this was a bit of a rabit liar, but still! I would heartly endorse the following action if you see another: FLEE LIKE MAD! Stingers and bad breath, honestly! What monstrous little beasties..."

"It can be quite dangerous to receive a large dose of bee venom-- for example, by being stung. That said, did you know that same substance is actually used in some women's perfumes? Indeed! A potent venom and a potent perfume... Which do you suppose is more devastating, wot?"

The Bee can be found flying from tree to tree along the back wall of the museum's insect exhibit.

Upon being donated, the Bee can be found in the room of the bug exhibit with the light in, flying around and resting on a tree in the back. The exhibit has this to say about the Bee:

"Bees are prone to attack anyone who comes too close to their hive, so be careful when approaching! The yellow and black you see on their bodies are colors often used to convey danger. This danger is pretty significant, as many varieties of bees are capable of stinging multiple times."

Upon donating the wasp to the museum the curator, Blathers, will say the following:

"Hoo! Allow me to share a fact with you! Wasps are sometimes called "meat bees" because...They. Eat. MEAT! MEAT! Of almost any sort! Surely you've seen what a menace they make of themselves at picnics. 'Tis hardly the worst of it, wot wot! Aggressive predators with venomous stingers, wasps not only hunt and eat other insects... they paralyze their prey, then drag their victims home ALIVE, leaving them for their larva to feed upon. Suddenly a simple sting seems quite tolerable."

Apis cerana japonica, the Asiatic honey bee, on a flower

Apis cerana japonica, the Asiatic honey bee, is a hardy species of bee that originates from South-Eastern Asia. It is used commercially for its honey, despite having a smaller yield than its European counterpart, Apis mellifera. Mellifera has, however, been subject to selective breeding for many centuries, greatly increasing honey output over the years. 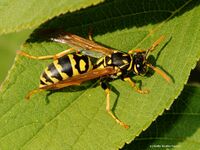 Polistes dominula, the European paper wasp, on a leaf

Polistes dominula, the European paper wasp, is a species of wasp that originates from Europe, North Africa, and southeast and eastern Asia. Like the Asiatic honey bee, the European paper wasp is a social species, congregating in large hives composed of numerous interlinked hexagonal cells similar to a honeycomb; rather than being made from natural wax, however, these hives are constructed of paper, created by chewing wood into pulp and spitting it out, hence the name "paper wasp." A special protein in the wasps' saliva toughens and waterproofs the pulp, allowing the hives to maintain shapes like that seen in the Animal Crossing series and ensuring greater protection from predators. Paper wasps are known to be more docile than other wasps, such as yellowjackets and hornets, and do not sting unless provoked or their nest is under threat.