The Tarantula[nb 1] is a rare insect in the Animal Crossing series. It is worth 8,000 Bells. They are found on the ground at night, and they can be difficult to catch, similar to the Scorpion and Wasp, as well as harmful - however, they do not attack the player unless they are carrying a net, and, unlike the Wasp, the Tarantula does not leave a mark. If startled by rapid movement (whilst holding the net), in the same fashion as the Scorpion, it will attack (presumably bite) the player, causing the player to be momentarily stunned before fainting, which then leads to the player waking up in front of their house, or the dock next to Wilbur or Kapp'n on a Mystery Island or boat tour island respectively. If the player is not carrying the net whilst a quick movement is made near the Tarantula, like many other bugs in the game, it will move away from the player. In Animal Crossing: New Horizons, if a villager is near a tarantula, they will stop what they were doing, display the shocked reaction, then stare at the tarantula using the intense reaction until it despawns. If the player successfully catches one, the villager will display a sigh of relief using the sighing reaction, then return to what they were doing. The same applies to the Scorpion.

"I caught a tarantula! Don't try this at home!"

"I caught a tarantula! I don't wanna arm-wrestle this guy!"

"I caught a tarantula! WHAAAA! Destroy it!"

In Animal Crossing: New Horizons, the Tarantula is a lucky item during winter, meaning it gives a 777-point Happy Home Academy bonus when placed in the player's house.

"I caught a tarantula! This situation just got hairy!"

As with all insects in the Animal Crossing series, the Tarantula can be donated to the museum, followed by a small talk by Blathers, the curator.

"Hoo my! It's simply amazing that you were able to catch one of these monsters... Not only is it poisonous, it's as hairy as can be... Blech! Hairy and toxic... Is there any combination more vile?"

Tarantulas are slightly rarer than Scorpions. The Tarantula can be found in the second room of the bug exhibit, in the area where the Dung Beetle and Pill Bug are displayed.

"Hoo, such foul fuzziness! And have you seen how fast they move? It's enough to make an owl faint. They're quite docile beasts, and it's documented that they rarely attack people... But when I look at them up close like this, I start to wonder if the experts might be wrong, eh wot?!"

It can be found in the first enclosure on the middle terrace, which holds the Scorpion, Centipede, Flea, and Fly, to name a few.

The Scorpion and Tarantula can be seen battling with each other when both have been donated. The Scorpion can be seen shaking its stinger at the Tarantula, which makes a rattling noise. The Tarantula can be heard making a hissing-type noise, which might be associated with the insect's defense mechanism of scratching hairs at enemies. They will circle each other, and eventually both jump into the air and collide, then begin their battle again. If the Scorpion is absent, the Tarantula will watch the player.

A Tarantula in the museum in Animal Crossing: New Leaf

Rather than a small talk by Blathers, information is provided on the Tarantula's enclosure.

"Tarantulas are large arachnids that live in warm areas. They're sometimes kept as pets. They have sharp fangs, and while it is painful if you're bitten by one, they aren't deadly to humans. What's scarier is the hair they kick off of their abdomens to protect themselves. The hair can cause serious itching and rashes wherever it sticks and can be rather difficult to remove."

"As giant spiders go, the tarantula is said to be quite docile. But have you ever seen such foul fuzziness?! It is a fact, tarantulas have barbed belly hair! I say again...BARBED. BELLY. HAIR! These awful arachnids let loose their spiky, itchy hairs to protect themselves from predators. But seeing how tarantulas also prey on frogs, mice, and even birds, one must ask... Who needs protecting from whom?! Hoo! Who indeed!"

The Tarantula can be found in the laboratory section of the bug exhibit, contained within a forest display case. 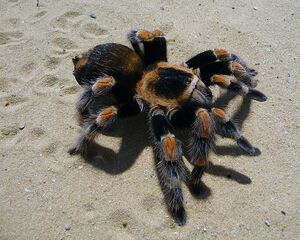 It is unknown what type of tarantula appears in the Animal Crossing games. There are different types of tarantula: ground hunters, tree hunters, as well as venomous and nonvenomous ones. Although a tarantula has eyes, its keenest sense is touch. It feels vibrations in the ground and determines the location of its prey through them. They are exothermic, but under a thermal image, the abdomen appears the brighter than the rest of its body (indicating warmth).

The tarantula in the Animal Crossing series resembles the Mexican redknee tarantula (Brachypelma smithi). These terrestrial tarantulas of the west side of Sierra Madre Occidental and Sierra Madre del Sur are popular among enthusiasts. The females can live to be 30 years while the males lead a much shorter 5 years or so. The male has a comparable size to the female, but has a smaller body with longer legs. The tarantula must undergo occasional molting to grow. The Mexican redknee tarantula is docile, unlike the tarantula in Animal Crossing, and it is only slightly venomous.