The Fly[nb 1] is an insect that can be found throughout the year, quickly flying round rafflesia, spoiled turnips, or discarded rubbish such as tires, cans, and old boots that are caught when fishing. There may be a number of Flies around the object, which can be caught individually. Flies can be hard to catch, as although they make a loud, high-pitched buzzing noise, they are very small and so are hard to spot. In New Leaf, Flies are just as common as they were in previous Animal Crossing games whenever rafflesia, spoiled turnips or rotten fruit are around. However, Flies rarely appear when rubbish is on the ground, unlike previous Animal Crossing games where they are just as common when trash is around. Flies sell for 60 Bells, making them one of the least expensive insects in the Animal Crossing series. The Fly depicted in-game appears to be modeled on the housefly.

When caught, a red ring and pointing hand are used to show where the Fly is in the player's hand, a demonstration of its small size.

Flies tend to swarm around the rafflesia, a flower, due to its foul smell. This stench is, in fact, used to attract such insects as Flies in order to pollinate. In City Folk, a rafflesia can be found in the insect exhibit. Once donated, a Fly will buzz around it.

As with all insects in the Animal Crossing series, the Fly can be donated to the museum followed by a small talk by Blathers, the curator.

"Blathers, being as afraid as ever of bugs, will comment, as always, on the donation: "My largest complaint about these vile bugs are their filthy little feet, wot! Leaping about on my dinner! FOULNESS! UTTER FOULNESS! Blech! The mere thought... Couldn't they at least scrub those fly toes?"

"Hoo, you are aware that flies also serve as an important source of data for the academic world? Their simple structures make them rather ideal organisms to use in many experiments, wot? So remember, next time you see a fly, know that it's more than a bug that just flies around dumpsters!"

"Flies are often seen rubbing their forelegs to clean them, which seems odd, because, well, they're flies. However, they need to keep their legs clean as they contain taste and tactile receptors. By doing so, they can better savor the flavor of whatever they find to eat next. The legs also contain a sticky liquid so flies can more easily land on smooth surfaces."

When asked about the bug, Blathers will say:

"The foul fly is quite the disquieting creature. I tell you, it tastes its food with its feet! Yeep! In fact, when flies rub their legs together, they do so to get rid of debris blocking their taste receptors. And did you know, their hairy toes release a sticky goo so they can walk on any surface? Even your ceiling! This gross goo gets on your food too!"

The Fly can be found in the back office in the laboratory section of the bug exhibit. It is in a cylindrical case on the left-hand side of the room. 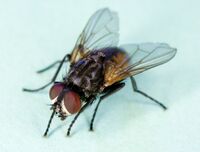 Houseflies, Musca domestica, are a common species of fly that can be found throughout the world. They have red compound eyes and are colored gray. The housefly is thought to have evolved in the Middle East 65 million years ago, and has spread with the dispersal of man throughout the world. Flies can carry up to around 100 diseases, and they are also known to inhabit less hygienic areas. Flies live for around 15 to 25 days, and can have up to 500 offspring. They are around 6 to 9mm long. Houseflies can only survive in higher temperatures- In the winter months, they only exist at larvae or eggs. These larvae can be hatched from eggs in only a day. Flies only live in colder climates where humans are present.