The Scorpion is a bug in the Animal Crossing series introduced in Animal Crossing: Wild World. Like the Tarantula and Wasp, they are hard to catch as well as harmful, but will only attack a player if they are holding a net. If startled by rapid movement (whilst holding the net), it will sting the player, which causes the player to faint and re-awaken outside of their home, though with no other status effects upon awakening, or the dock next to Wilbur or Kapp'n on a Mystery Island or boat tour island respectively. In Animal Crossing: New Horizons, if a villager is near a scorpion, they will stop what they were doing, display the shocked reaction, then stare at the scorpion using the intense reaction until it despawns. If the player successfully catches one, the villager will display a sigh of relief using the sighing reaction, than return to what they were doing. The same applies to the tarantula.

"I caught a scorpion, but it didn't catch me!"

"I caught a scorpion! It looks kind of crabby to me..."

In Animal Crossing: New Horizons, the Scorpion is a lucky item during summer, meaning it gives a 777-point Happy Home Academy bonus when placed in the player's house.

"I caught a scorpion! It was a sting operation!"

Upon donation of the Scorpion to the museum, Blathers the curator will say the following:

"I've heard that a scorpion can be affected by its own poison, you know. If so, why carry around such dangerous material? Blech! Foolish wretch... If I walked around with a piano above my head, I'd expect to be squashed, wot!"

After donation, the Scorpion can be found on the second tier of the museum, in the same enclosure as the Tarantula. The Scorpion and Tarantula can be seen battling with each other when both have been donated. The Scorpion can be seen shaking its stinger at the Tarantula (once donated), which makes a rattling noise. The Tarantula can be heard making a hissing-type noise in return, which might be associated with the insect's defense mechanism of scratching hairs at enemies. They will circle each other, and eventually, both jump into the air and collide, then begin their battle again. If the Scorpion is donated on its own without the Tarantula, it will be aware of the player's presence and shake its stinger at them instead, but never attacking. If the player has the net equipped when walking in the museum (although it is not visible), sometimes the Scorpion will lunge out of its area and charge at the player.

Upon donation to the museum, Blathers the curator will say the following:

"...Scorpions are assuredly attention getters. They've got those colors that say, "Stay back! I'm poisonous!" However, it seems only a tiny group of scorpions have venom lethal enough to off you with one sting. Mischievous scorpions that look like highly poisonous ones probably fooled folks into thinking otherwise."

Upon donation to the museum, Blathers will place this description in the insect exhibit:

"Scorpions resemble crabs and are in the class arachnida, though they aren't aquatic. Most species possess venom, but of the 1,000 or more species, only 25 are deadly to humans. Scorpion eggs hatch inside the females abdomen, and the young spend time on her back after birth"

"The scorpion...how should I put this? Those legs! Those pincers! That tail! And that venomous stinger! It's as if someone took all the most awful insect parts...and put them together to make the scorpion! All scorpions are venomous, you know! Though I understand that only a few kinds are truly deadly. I feel I might die just thinking about it."

When donated, it is found in the large desert sand tank in the back room of the bug exhibit, sharing it with the Dung Beetle. 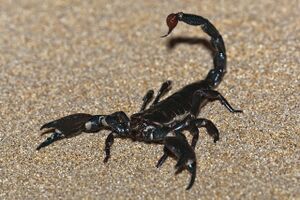 Scorpions belong in Arachnida class, which also includes spiders and ticks. Unlike most arachnids, scorpions are ovoviviparous, which means scorpions hatch eggs inside their bodies while their young are born live. Then, the young depend on their mother by riding her until their first molt. Scorpions are found in a variety of landscapes, except for the tundra, in all continents except for Antarctica. Although scorpions are feared generally, only 25 out of over 1,700 known species can produce potent enough venom to kill humans. Scorpions are nocturnal, hence why they are found only during the later hours of the day in Animal Crossing. Scorpions are known to consume massive amounts of food in one sitting, and they have low metabolism. Despite this, they can consume only liquids. Scorpions will glow when placed under ultraviolet light.