"Eww... I caught a dung beetle! Shouldn't you be rolling something else?"

"I caught a dung beetle! Nah, the joke's just too easy."

In Animal Crossing: New Horizons, dung beetles cannot be caught on another player's island, since snowballs do not appear when the player's airport gates are open.

"I caught a dung beetle! This species likes feces!"

As with all insects in the Animal Crossing series, the Dung Beetle can be donated to the museum followed by a small talk by Blathers, the curator.

"I say, I've actually heard it said that their dung-rolling is considered endearing! Absolute rubbish. It is a dirty habit. Dung is dirty. There is no refuting it! Hoo... What a world..."

"These beetles are also known as scarabs and were once revered in some parts of the world. Looking at it now, I must admit there IS something a bit refined about its antennae and legs..."

After donation, the dung beetle can be found rolling a piece of dung in the lower terrace in the smaller dirt circle, sharing the exhibit with the migratory locust.

Since Blathers does not talk about the bug, the exhibit provides the information as follows:

"Dung beetles are famous for the exact thing you'd assume they're famous for. In fact, they use their namesake both as a source of food and a place to lay their eggs. Dung beetles are very strong and can roll things 10 times the weight of their bodies. One species can even pull objects 1,141 times its weight, which is like a human pulling 6 packed buses!"

"What can I say? The aptly-named dung beetle feeds on the feces of animals. Hoo! You heard right! This putrid pest rolls up balls of dung...and then rolls them away to dine on at a later date. As if that weren't atrocious enough, some dung beetles lay their eggs in the feces too! What a dreadful place to raise the young."

When donated, it is found in the large desert sand tank alongside the Scorpion in the back room of the bug exhibit, next to the tarantula tank. 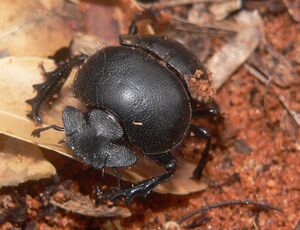 Members of the insect family Scarabaeidae feed almost exclusively on feces and decaying matter. Many species have a good sense of smell. Dung beetles lay their eggs in dung. There are around 30,000 species of scarabaeidae worldwide.