"SLURRRRP! Hm? You think I'm drooling? How imaginative you are! It was probably just the sun in your eyes!"
— Nat, Animal Crossing: New Leaf

Nat is a green chameleon. He has eight lighter-green dots on his forehead, large yellow eyes with black pupils, and a yellow tongue. He wears an explorer hat and shirt, along with small glasses that sit on the end of his nose. In his RV in Animal Crossing: New Leaf - Welcome amiibo, he wears a beige kimono. Nat carries a blue-rimmed bug net in his right hand and a bug cage in his left hand.

Nat often uses British colloquilisms when speaking, and he refers to the player as "old bean."

It is implied that Nat loves to eat bugs, which is the main diet of real-world chameleons, and that he eats the bugs given to him by participants in the Bug-Off. This is evidenced by him calling the bugs "scrumptious" and "delectable", and making slurping noises after receiving a bug. Despite this, he denies eating them and says that he is keeping them for purely scientific reasons.

During the Bug-Off in City Folk, Nat pitches a green and white tent outside the town hall at 9 AM. He waits for players and villagers to bring him different types of bugs and rates them according to rarity, luster, color, and size, and then gives them a mark using an unknown point system. For each insect players give him that is rated highly and breaks the first place record, players receive an item of furniture. Any insects given to him will not be returned, whether they win or not. He picks the winner at 6 PM, giving a total of nine hours to find insects.

The winner with the highest rating insect wins a trophy, which is sent to them in the mail by Nat for the next day; a message written by him then appears on the bulletin board.

Nat continues his role in New Leaf, with a few differences. He now presents an awards ceremony, hands out trophies to the top three competitors, gives furniture from the Insect Set for record-breaking entries scoring at least 80 points, and rewards the player a Golden Net if they catch every type of bug.

While initially absent from Animal Crossing: New Horizons, Nat was added in an update on November 4, 2021, showing up if the player scans his amiibo card in The Roost. A photo of him can also be seen on the billboard in the laboratory-chamber of the museum's bug section. Interacting with it can show the date of donation of few bugs, like the flea or the paper kite butterfly.

In Animal Crossing: New Horizons – Happy Home Paradise, Nat can be found outside Paradise Planning requesting to give a lecture at the School. After doing so, the player will be able to use bugs they have in their inventory to decorate the yards of any client.

Additionally, Nat's poster can be obtained from Nook Shopping after inviting him to Photopia via his amiibo.

In Animal Crossing: amiibo Festival, Nat comes during the warmer months to host the Bug-Off. He will judge bugs brought to him by the player, and the winner is awarded 20 Happy Points.

In Super Smash Bros. for Nintendo 3DS, Nat appears as a collectible trophy.

Tread on a worm, and it will turn. 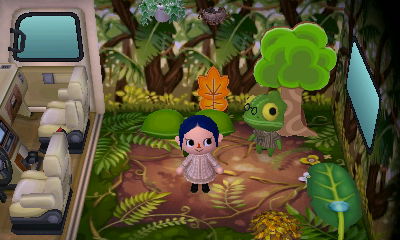 Tread on a worm, and it will turn. 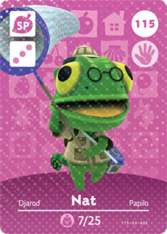