This article is about the event. For the song by K.K. Slider, see "K.K. Birthday."

The birthday cake received on the player's birthday in Animal Crossing

In Animal Crossing, the player is sent a birthday cake furniture item from Mom. The player will also receive letters from villagers with presents and be greeted at the player's front door by another villager who will personally present a gift, Donkey Kong.

Animal Crossing: Wild World is the first game in which villagers also have birthdays. The player can visit them in their house on that day, where they will be walking around their home with a fellow villager that they get along with, usually one of the same gender. The player can give any item to the villager that is celebrating their birthday for a gift, but this may cause the game to freeze. The two villagers in the room, if near to each other, may applaud and laugh. A player can tell if it is a villager's birthday by a letter sent by them in advance, and a notice that appears on the bulletin board on the day. Villagers do not have parties if the player's gate is opened.

The player themselves receives a birthday cake furniture item when they start the game on the day that is assigned as their birthday. The player will also receive a letter and a present from their mother.

The cake received on the player's birthday in City Folk

Unlike in Wild World, villagers do not celebrate their birthdays, despite a notice on the bulletin board that congratulates them. Instead, a player can send the villager a letter on that day. The villager then thanks the player for wishing them a happy birthday in their reply.

As with Wild World, the player is presented with a cake on their birthday by a villager, which can be placed in the home or eaten. After eating, flowers briefly blossom from the player, much the same as the emotion "delight." 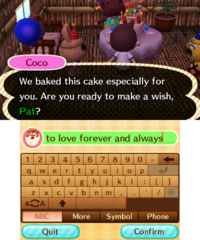 The host may also ask the player what they wished for, but it is up to the player if they want to tell the host. After this, the birthday party will be over. From here now on, the villagers will simply dance around the room and sing the town tune until the player decides to leave.

If the player visits K.K. Slider the Saturday before the birthday, K.K. Slider will sing "K.K. Birthday." He will not give the player a copy, but the following day, the player will receive it in the mail.[1]

Villagers also celebrate birthdays. If the player gives them a present, the next day the player will receive a letter from that villager. There's a chance that no birthday party will occur if the player time-travels too often or doesn't play for a long time. Their house will have cake, furniture, and a CD player with "K.K. Birthday."

A birthday cupcake in New Horizons

In Animal Crossing: New Horizons, a week before the player's birthday, a notice will be posted on the bulletin board. On the day itself, Tom Nook or Isabelle will mention it in the public announcement. As the player leaves their home, they will immediately be greeted by one of their villagers. They will then be taken to that villager's house, which will have been redecorated with a birthday cake in the center. Two other villagers will be in attendance.

After blowing out the candles on their cake, the player is given a birthday-related item. Then the player will be given a stick and a piñata set up for them to beat. The piñata contains birthday cupcakes; the faster the player hits it, the more cupcakes there will be. The player is then given the cupcakes and can enjoy the party until they leave the house, after which it returns to normal. When the player exits their house after the party, they will receive a Homemade Cake from Mom in the mail. Additionally, a Nook Miles Stamp called "Happy Birthday" will be unlocked.

The birthday cupcakes can be used as a decoration or eaten but they cannot be sold. More usefully, they can be given to villagers to receive a gift, which will be a birthday-related item. This also works for villagers from other islands. When giving a villager a birthday cupcake, the player can receive one of the following:

K.K. Slider will be outside of Resident Services, and he will perform "K.K. Birthday." During the performance, instead of the credits, birthday messages from the island's residents will flash on screen. It is possible for other players to visit the birthday celebrant and write custom messages, of which K.K. Slider will show only to that birthday celebrant when "K.K. Birthday" is initially played. Afterwards, the player will receive an aircheck of the song. The player will also receive those custom messages in the mail with his stationary and with the sender being those players. If the birthday takes place during an event such as a Bug-Off or Fishing Tourney, K.K. will instead perform on a Sunday.

Brewster will also wish the player a happy birthday after drinking his coffee at The Roost. 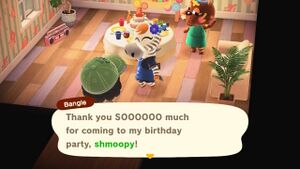 Bangle thanking the player for celebrating her birthday

Villager birthdays are similar to player birthdays, except celebration is optional. They are announced on the bulletin board a week in advance and then by Tom Nook/Isabelle in that morning's announcements. If the player's birthday falls on the same day as that of a villager, both will be mentioned on the bulletin board and morning announcements. The villager's party will be in their home and that villager will be found there for the rest of the day.

Attending and giving a gift will boost the player's friendship with that villager, and they will send a thank-you gift in the mail the next day. Additionally, the player will earn a Nook Miles Stamp titled Birthday Celebration, which has 3 tiers. It is also possible for players from other towns to visit and give gifts to the birthday participant.

If two villagers living on the player's island have the same birthday, they will have a shared party in one of their houses. Both villagers wear the birthday hat and will talk about how surprising it is that they share a birthday with another villager. The player can give a present to both of the birthday villagers.

It is now possible to visit other islands to celebrate villagers' birthdays, whereas in previous games, letting visitors in will cause villagers to stop celebrating their own birthdays.

In Animal Crossing: amiibo Festival, if the month during which the game is set contains the birthday of one of the amiibo figurines. Special event spaces marked by a cake will appear on the game board. Landing on one of these spaces will award the player Happy Points — with the player whose amiibo's birthday is that month receiving the most points. In addition, villagers on the game board have random events for their birthdays. 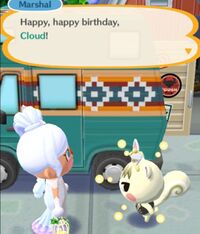 In Animal Crossing: Pocket Camp, villagers will congratulate the player, though unlike in main series games, presents are not given and a party is not held. However, there is special dialogue if the player was born on a special day, such as Leap Day, New Year's Day, etc.