New Year's Day is an event in the Animal Crossing series held on the first day of January, representing the real-life holiday of the same name. It has appeared in every title to date since Doubutsu no Mori. What actually happens during the event varies between the games, however. On the day prior to New Year's Day, the Countdown occurs in anticipation of the new year. 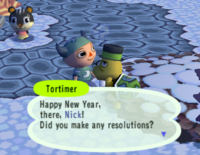 The player talking to Tortimer in Animal Crossing

In Animal Crossing, villagers will gather near the wishing well from 6 AM to 11 AM. By talking to the villager making a wish near the well, the player is able to make their own New Year's wish by asking to go next. Katrina will also be present near the wishing well to read the player's fortune for the year for 50 Bells. She will give the player a fortune written on Fortune Paper, which is exclusive to this event and appears unorderable in the stationery catalog.

Additionally, the player receives 10,000 Bells from Mom in the mail, and they can talk to Tortimer to receive a random diary. If the player has upgraded Nook's shop past Nook's Cranny, he will also sell Mystery Bags for 2,000 Bells each.

In Animal Crossing: Wild World, the player can speak to Tortimer in this day to receive a random fortune. Tortimer can be spoken to multiple times for different fortunes.

In Animal Crossing: City Folk, Tortimer gives the player a New Year's Shirt corresponding to the current year (up to 2035), and the player will also receive 1,000 Bells from Mom.

In Animal Crossing: New Leaf, the player will receive a gift from their Mom, which will either be 10,000 Bells or a house plant, although if they do not play on New Year's Day, they will not receive such letter. A special cutout is available in the event plaza, and Isabelle will also be present there until 12 AM.

When Isabelle is spoken to, she gives the player a gift which is an animal based off the Chinese zodiac of the current year. They act as furniture and can be displayed in the player's house. All zodiac items have the Harmonious interior theme, sell for 120 Bells at Re-Tail, and, except for the Zodiac Boar, are only obtainable from the event. 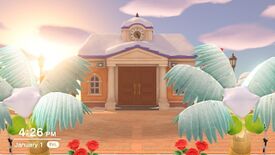 The sun on New Year's Day in New Horizons

In Animal Crossing: New Horizons, Isabelle wishes the residents a happy new year in her daily announcement, and unique music plays all day in place of the standard hourly music. The skies are brighter than they usually are, meaning shadows are longer near morning and evening hours. Additionally, if accessed, the Nook Stop rewards the player with 500 Nook Miles to celebrate the new year and gives all players a seven-day streak starting the following day due to the closure of Resident Services during the Countdown, regardless of the player's previous streak. Brewster will also wish the player a happy New Year after drinking his coffee at The Roost.

In addition to the event itself, several seasonal items are sold via Nook Shopping from January 1 to 15 to celebrate New Year's Day in various regions. The items include celebratory arches for 2021 and 2022, Yut Nori, and the zodiac figurine correspondent to the current zodiac (e.g. in 2021 the zodiac ox figurine was given out)[nb 8]. A related holiday, Shōgatsu, also includes several seasonal items in Nook Shopping, including the kadomatsu, kagamimochi, New Year's shimekazari, and since version 2.0, the osechi and otoshidama envelope.

All New Year's Shirts in Animal Crossing: City Folk have the same name but are separate items. Each shirt has the year on the back and the year's zodiac animal on the front.

This page could be improved with the addition of images.
You can help by uploading one or more images and including them on this page.
Further details: Needs more screenshots from Wild World, City Folk, and New Leaf.

This page could be improved with the addition of images.
You can help by uploading one or more images and including them on this page.
Further details: Needs more screenshots from Wild World, City Folk, and New Leaf.
Retrieved from "https://nookipedia.com/w/index.php?title=New_Year%27s_Day&oldid=1086173"
Categories:
Hidden categories: