The event occurs from 6 PM to 9 PM on August 12th. At this time, the player can go to the town lake to watch the Meteor Shower. During the event, Tortimer will give the player a telescope for attending the event. During this event, the meteors can only be seen reflected through the lake, since the player cannot see the sky.

There are no Meteor Showers, but meteors may appear randomly between 7 PM and 4 AM in the sky, regardless of weather. The player can wish on these stars if they press 'A' while the meteor is on screen and are not holding a tool or umbrella. This will cause a spotlight item to be sent to the player's mailbox from "Wishy the Star" the next day.

The bulletin board will have a message about the Meteor Shower the day it occurs, which is completely random. This time, Meteor Showers are completely cosmetic—players cannot wish upon the stars and do not gain anything by watching them.

The Meteor Shower returns in New Leaf, appearing on random days when the weather is clear. They do not appear on the following dates:

A note will appear on the town's signboard between 10 and 11 AM on the day of the shower. As with Wild World, the player can wish upon a star, which is done by pressing 'A' upon hearing the twinkling sound of a shooting star. If a wish is made, the next day, a letter will appear in the mail from "Wishy the Star" with a piece of rare furniture. 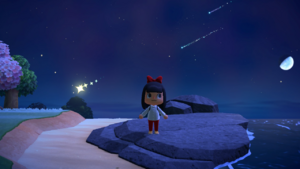 Multiple shooting stars may appear at once in New Horizons.

Meteor showers can occur on clear or partly cloudy nights after days with no precipitation, between 7 PM and 4 AM. Visits from Celeste always coincide with a meteor shower, but the opposite is not true: it is possible for a meteor shower to occur without Celeste visiting. When talked to for the first time, Celeste will instruct the player on how to wish upon shooting stars and give them a DIY recipe for a Star Wand; she will then give a new random space/zodiac-themed DIY each new day a player meets her, even if from a different island (which is random per person, unlike the gift from a crafting Villager).

Most meteor showers that take place throughout the year are small, with about 5 to 30 shooting stars per hour. However, if Tom Nook or Isabelle note a meteor shower's occurrence in the day's announcements, the meteor shower will be much heavier, with clusters of 5 or more shooting stars appearing every few minutes and over a hundred per hour.

The player may wish on shooting stars by first putting away held items, panning the camera all the way up, then pressing 'A' when a shooting star travels across the sky. This will cause a unique animation where the player closes their eyes, clasps their hands together, and makes a wish. The shooting star shines a bit brighter and makes a shine sound as a wish is made. The player may not wish on more than one star at once, but the animation is short and the shooting stars take a while to cross the sky so a player should usually get them all. Often only a few meteors will appear in succession, sometimes with a fair wait in between. Each meteor makes a unique sound as they appear, regardless of if the player is looking up, alerting players of their passing.

If the player makes any wishes, the next day, star fragments will appear on the island's beaches. The amount that appears depends on how many wishes the player made the previous night. There are three varieties of star fragments of increasing rarity: small, large, and astrology-correlated (the type changes depending on the date of the meteor shower; i.e., a meteor shower on April 24th may spawn Taurus Fragments the next day). The player may pick these up for use in DIY recipes. The number of star fragments that appear the following day has a cap of 40 if the player is wishing on their own island, and 20 if they are wishing on a friend's island.