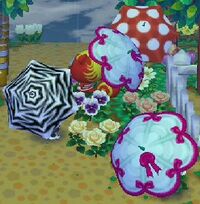 Umbrellas are handheld items in the Animal Crossing series. If equipped while it is raining, the rain will bounce off of the umbrella; however, they are purely cosmetic in most games. Each villager has a default umbrella and will equip it during the rain; in the summer in Animal Crossing: City Folk, villagers can also equip parasols.

The player holding an umbrella in Animal Crossing: New Leaf

If the player presses the action button while an umbrella is equipped, they will spin it, flicking off water if it is raining. In Animal Crossing, holding an umbrella on Animal Island prevents the player from tanning. Custom designs can be placed on umbrellas, and any umbrellas placed in the player's house are worth three Happy Home Academy points.