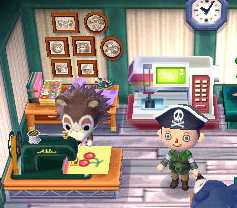 The player can import designs to Animal Crossing: New Horizons by scanning QR codes using NookLink in Nintendo Switch Online app. This is the only way for the player to obtain and use the Horned Hat custom design.

These designs were made exclusively by Nintendo or a Nintendo-related company.