In the Animal Crossing series, friendship is a measurement of how friendly the player is with a villager.

Friendship is measured on a numeric scale which is not directly visible to the player.

In New Horizons, data mining has indicated that the scale goes from 0 to 255, with six different ranges mapping to different levels of friendship. A new villager starts at 25 points, near the top of the first friendship level (0-29). "Good" friendship (levels 3-4) requires 60 points. "Best" friendship (levels 5-6), which is required to be able to obtain photos (pictures), usually takes much longer to reach, requiring 150+ points.[1]

Since version 2.0, the player can determine where their friendship level is with a specific villager by consulting Katrina for

1,000 Bells. The player is then able to pay Katrina

10,000 Bells while the friendship level with the selected villager is 1-4 in order to grant a small boost of two friendship points. The dialogue that is presented determine where the player is with a specific villager.[2]

The player's friendship level can be increased by doing tasks that make them feel better, such as talking to them daily, giving them gifts (in most cases), sending them letters, or doing favors for them. Conversely, acting rudely towards villagers, such as by talking to them too much, refusing or failing to complete favors, yelling in their face with a megaphone (New Leaf only), giving them trash as a gift, or hitting them with a net, lowers the player's friendship level with the villager. The exact actions that affect friendship may vary by game. 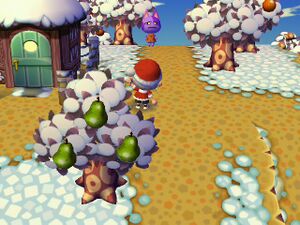 The player is waving to Bob, but he is not happy about seeing them as he is not on good terms with the player.

When the player waves at a villager in Wild World or City Folk, the villager responds in a way that indicates their friendship level. In order to wave at a villager, the player taps them using the touch screen (Wild World) or the Wii Remote (City Folk) when they are at least five spaces away from them. A villager who dislikes the player will ignore them, and either a piano crash or blowing wind will sound, depending on the personality. One who likes the player will bow (normal and lazy villagers), or they may wave back.

In New Horizons, villagers with low friendship may not show ongoing dislike of the player in the same way, though any villager can be upset for a time by player behavior such as hitting with a net. The current friendship level may be inferred from certain activities which are only available at or above a specific level. For example, the ability to give a gift each day during conversation is unlocked at level 2 (30+ points), and beginning at level 4 (100+ points) the villager might ask occasionally if the player wants to change that villager's catchphrase.[1] Additionally, when leaving a villager's house, they may wave faster or with both arms after reaching higher friendship levels, though the exact correlation is less clear and the behaviour may vary based on villager personality.