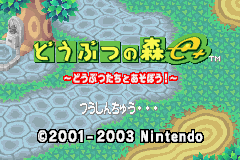 Doubutsu no Mori e+: Doubutsu-tachi to Asobou! is a collection of three Game Boy Advance minigames in Doubutsu no Mori e+ that can be accessed from the wishing well. Each day, the player can visit the wishing well and ask to play a minigame, after which they can download the minigame available that day to their Game Boy Advance to play. If the player wins the game, they will receive unique furniture items.

The minigame selection changes each day, with a total of three different minigames available: Darumasangakoronda, Donjanken, and Nakadojji. On Sunday, a random minigame is chosen for the day. 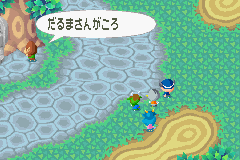 Darumasangakoronda (だるまさんがころんだ) is available on Mondays and Thursdays and involves the player, along with three other villagers, attempting to run up to a fourth villager, who has their back turned to the wishing well. While this villager's back is turned, the player can repeatedly press "A" to run up to the turned villager. After a short while, however, the villager will turn around again, and if the player is still moving, the villager will call them out of the game. If the player reaches the villager without being spotted, they win the game. 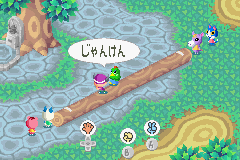 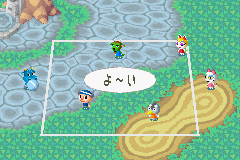 Nakadojji is available on Wednesdays and Saturdays and is a dodgeball-type game involving a player and three villagers in a white square, while two other villagers outside the square throw balls at them. The control pad is used to move around, while the A button is used to dive. If the player can avoid the balls long enough to be the only one remaining, they win.

The following items can be obtained from winning one of the three minigames. The item is mailed to the player by one of the participating villagers.