This article is about the items retrieved for villagers during favors. For the location where items appear for the player to take, see Lost and found.

Retrieving a lost item [nb 1] is a type of favor that the player may perform for a villager. This type of favor first appeared in Doubutsu no Mori e+ where a villager would ask the player to find a lost random item, but in Animal Crossing: City Folk, villagers would accidentally only lose their house key in the river. This was expanded upon in Animal Crossing: New Leaf with the introduction of a variety of lost items that can be found around town.

In Doubutsu no Mori e+, there is a chance that almost every two days, a villager will ask the player to find a missing item for them. There is no prompt to accept or refuse to search for it, as the player isn't the only one looking for the lost item around the town. Once the villager tells the player about their lost item, and sometimes about its possible location (near another villager's house, near the river, etc.), they have the rest of the day left to find it and return it to its owner.

If the item is found and returned to the asking villager, the player will sometimes obtain a reward for finding it. Rewards vary from obtaining a quantity of Bells equal to that of the lost item's exact selling price or a higher quantity depending on the item's worth to the owner, to obtaining another item in exchange such as a piece of clothing, furniture, or fruit.

Else, the following day, the villager will mention that some other villager found their lost item and will thank them for finding it and the player for trying to. As with other favors, returning the lost item sometimes might not shield a reward, but villagers will always give their thanks the player and not get angry at them no matter the result.

Items villagers may lose include a net, a fishing rod, a shovel, an axe, a pinwheel, a fan, a gyroid, or clothes.

A player catching a key in the river in City Folk.

In Animal Crossing: City Folk, a key is an item that a villager uses to get into their house. From time to time, a villager will be seen walking only around the outside of their house and will state that they are locked outside and has lost the house key somewhere around town. The villager may further reveal the location, which is the river - including the waterfall and lake. The key can only be found after the player has talked to the villager.

The key appears as a small fish shadow in the river, about the same size as a Crucian Carp. Once the player has fished it out the river and returned it to the villager, the villager will give them a small reward, usually furniture, a gyroid, or a small amount of Bells.

Finding and returning the lost item in New Leaf

In Animal Crossing: New Leaf, a lost item belonging to one of the villagers may randomly appear on the ground outside. The player can ask any villager if they lost an item. If the villager says they lost the item, then the player will be rewarded with a random fruit, clothing, or furniture. If the item does not belong to that villager, they will return it and wish the player luck. It appears in multiple different forms around the town, including a book, brown bag, and a mitten. If the item given is a fruit, it will not be a perfect fruit. Lost items cannot be thrown away, sold, or dropped once picked up. There can only be one lost item in the town per day that may be returned to a villager.

If the item is not returned within a day, it will change in the player's inventory into an item titled "What was this?" The only option will be to open it. This means that players can choose to keep the lost item and forgo increasing friendship with a villager. If the player sells the lost item to Reese, Reese will instead ask for a disposal fee of 400 Bells, like any other trash items.

Not delivering the item on time will lower the friendship between the player and villager, most likely the same amount as denying a request from a villager.

In Animal Crossing: New Horizons, lost items function similarly to those from Animal Crossing: New Leaf. In addition to presenting the lost item to the villager, the player has the option to investigate the properties of the lost item beforehand to figure out the owner; a message will be displayed that corresponds to a specific villager personality type. If the player shows it to the wrong villager, they will be told the name of the villager who the item belongs to. If the player correctly identifies the owner without speaking to the wrong villager, the friendship between the owner and the player will increase more than if they attempt to give it to the incorrect villager first. There are four types of lost items: a book, a planner, and two visually identical pouches.[nb 2] Similar to New Leaf, if the item is not returned within a day, it will change in the player's inventory into an item titled "What was this again?" However, the option to open it does not appear, and it will be considered trash. Unlike most other trash items, attempting to sell "What was this again?" items in Nook's Cranny will dispose it for free. Additionally, it cannot be sold in the drop-off box. Lost items will appear if there is a visiting player. However, the visiting player cannot pick up the item. 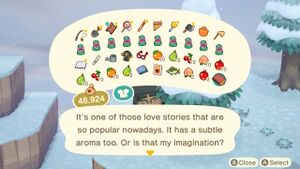 Each of the four types of lost item has a unique hint for each villager personality. If the villager who owns the item has a low friendship level with the player, there is no hint and it instead reads, "Someone lost this...".

This page could be improved with the addition of images.
You can help by uploading one or more images and including them on this page.
Further details: Needs a Doubutsu no Mori e+ screenshot.

This page could be improved with the addition of images.
You can help by uploading one or more images and including them on this page.
Further details: Needs a Doubutsu no Mori e+ screenshot.
Retrieved from "https://nookipedia.com/w/index.php?title=Lost_item&oldid=1056175"
Categories:
Hidden category: