"She's very gentle, kind, and calm. If you talk to her, it will feel like you've always been friends!"
— Isabelle, talking about a normal villager, Animal Crossing: New Leaf

Normal,[1][2] also known as sweet,[2] is a female villager personality type in the Animal Crossing series. Normal villagers are portrayed as sweet and friendly, and they often have an interest in reading or cooking.

As of the release of Animal Crossing: New Horizons, there are a total of 75 normal villagers across the series;[nb 1] 63 appear in New Horizons. 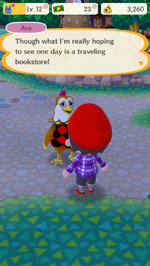 Ava expresses an interest in one day seeing a traveling bookstore; reading is a common interest of normal villagers.

Normal villagers, despite being called "normal," are known for their sweet demure and naivete. Some common interests they have are reading or cooking, and often discuss what they read with the player. In this respect, they are the female counterpart to lazy villagers. Normal villagers, due to their "normal" nature, often see themselves as the only "sane" people in the town, as all other personalities are exaggerated stereotypes of real-life personalities. In Animal Crossing and Doubutsu no Mori e+, the normal islanders Caroline, Faith, and June, plus Marina, Norma, and Patricia in e+, act down-to-earth in their speech, stating various "blessings" of the island and its surrounding landscape.

They are also much more airheaded and childish, dreaming of living in fairy tales or remarking at how "magical" a piece of furniture is. They are very rarely (if at all) angry and tend to take insults and disappointment easily, but will apologize even though they may not have done anything wrong.

Due to their all-around kindness, they get along with most villagers, even the ones with cranky and snooty personalities, although they may still be angered by them if the wrong things are said. For instance, a lazy villager may imply to a normal villager that they want them to cook food for them, offending the normal villager. Peppy villagers tend to get along best with normal villagers, as both are female and tend to share many of the same interests.

In Animal Crossing: New Horizons, they find it easier to relate to snooty villagers now that the snooty villagers are less self-centered and more gentle, polite, and refined. Conversations between them often tend to center around their common interests, such as reading books or doing things the "old-fashioned" way.

Below are some (not all) quotes made by normal villagers.