Patricia (パトリシア, Patorishia?) is a normal rhinoceros islander in Doubutsu no Mori e+. She can only move to Animal Island if her e-Reader card is scanned.

Patricia is a yellow rhinoceros with large beady eyes and pink horns and hooves. The horns on her head have green trims, making them look like sliced watermelons. She also has orange spots around her face.

As a normal islander, Patricia has a peaceful, spacey nature prone to daydreaming and getting lost in thought. In conversation, she frequently reads the player's aura or comments on the natural beauty of the island. Due to her fanciful outlook on life, she is often kind in dealing with the player but can easily wander off into mystical, eccentric, or even nonsensical conversation. She meditates frequently in her pursuit of harmony and tranquility and will request furniture from the player that she believes will improve her meditation.

As an islander, Patricia's house in Doubutsu no Mori e+ will begin with only one furniture item, along with the exotic wall and bamboo flooring. She will request specific items for the player to give to her, which she will place in her house. After she places two items in her house, she will upgrade her wallpaper, and after she places five items, she will upgrade her flooring. Faith requests for the same items as Patricia, although her house has different wallpaper and flooring. 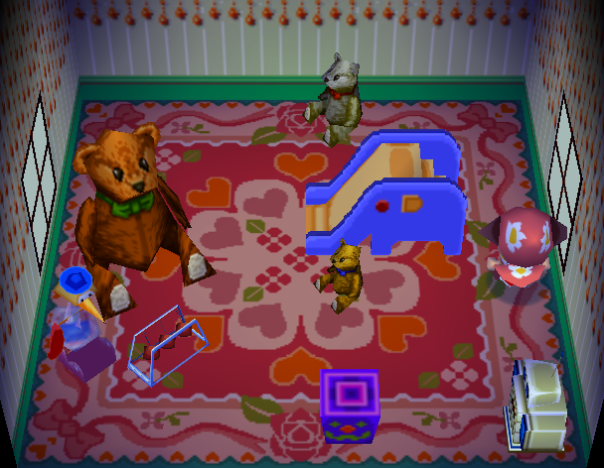 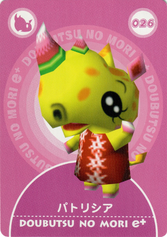 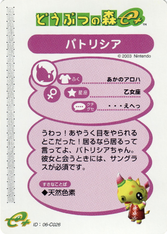