Elina is an orange elephant who has a purple flower in her hair. She has dark brown hair on her head and the tip of her tail. She has green eyes and wears green eyeshadow. The tip of her trunk and hooves are light orange. Elina also has a half-smiling mouth on the left side of her face, like many other elephants. In Doubutsu no Mori+ and Doubutsu no Mori e+, she also has a red bindi on her forehead, a dot worn by many South Asian women, especially Hindus, for whom elephants are of great religious importance. Similar to Aziz's, this was removed in Animal Crossing.

As a peppy islander, Elina has a haughty, forceful nature prone to telling the player how to behave. In conversation, she will often digress into stories about when she was a little girl and will boast about her past athletic prowess. Her bossy personality will often result in coaching the player in how they should hold themselves, play sports, and even how they should burp. Elina speaks using laid-back, rustic slang and will ask the player for items that remind her of when she was a little girl.

As an islander, Elina's house in Animal Crossing will begin with only one furniture item, along with the exotic wall and bamboo flooring. She will request specific items for the player to give to her, which she will place in her house. After she places two items in her house, she will upgrade her wallpaper, and after she places five items, she will upgrade her flooring. Violet requests for the same items as Elina, although her house has different wallpaper and flooring. 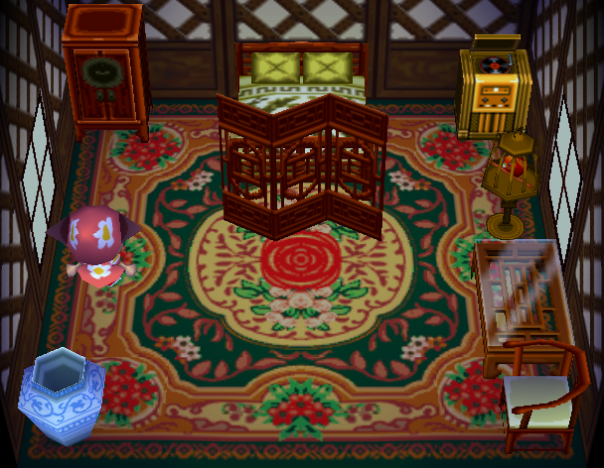 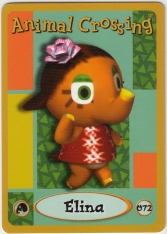 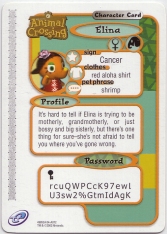