Chrissy is a peppy rabbit villager in the Animal Crossing series. She first appeared in Doubutsu no Mori e+ and has appeared in all subsequent games except Animal Crossing: Wild World. According to her e-Reader card profile, her profile on the official Japanese website for Animal Crossing: City Folk,[1] and her Pocket Camp description, she is the younger sister of Francine.

In New Horizons, Chrissy has the fashion hobby and may be seen wearing a pink purse with a white flower on it, as well as a specific headwear or accessory item.

Chrissy in Doubutsu no Mori e+.

Chrissy is a white rabbit with a pink polka-dot hood, a blonde fringe, a green nose, and pink blush. She has two pink eyelashes near the bottom of her eyes. She has black eyes with white sparkles in them, although her eyes change to pink when she is shocked. She is almost identical in appearance to Francine, the differences being that Chrissy is pink instead of blue, and Francine has different eyes. She is almost always smiling.

As a peppy villager, Chrissy will have the tendency to over-react in conversations about trivial subjects such as appearing in competitions and the chance of her losing. This sometimes triggers her to ask for a certain item of clothing or furniture which she needs to enter a competition. She, like other peppy villagers, will rarely be discouraged from doing anything, including the usual hobbies. She will also have a short attention span, which means she will soon forget arguments or tasks given to the player which were not completed. She says that the color pink suits her best. She will be, like all peppy villagers, friendly and excitable, and she will come out of her house often. She will rarely get discouraged from doing anything. She will often ask the player for a fossil because she is interested in hunting for them. Keep in mind that she may have a mean attitude to snooty villagers and will blame the player for something she dislikes. Rather than becoming sad from other villagers and will make rude comments, she will become enraged. She doesn't eat too much, so this will not be a problem for her since jocks won't make fun of her. Cranky and snooty villagers will make fun of her, calling her names. She will get along with jock, lazy, normal and other peppy villagers who seem to be open minded to her, but may annoy snooty and cranky villagers due to her upbeat and cheery personality.

In Doubutsu no Mori e+, Chrissy can only move to the player's town if her e-Reader card is scanned. 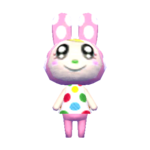 A fool and their Bells are soon parted.

In Doubutsu no Mori e+, Chrissy's house features several items from the Lovely Series. She also has a Plum Kimono, an item that is normally unobtainable. Her house features the same furniture layout as Monique's. 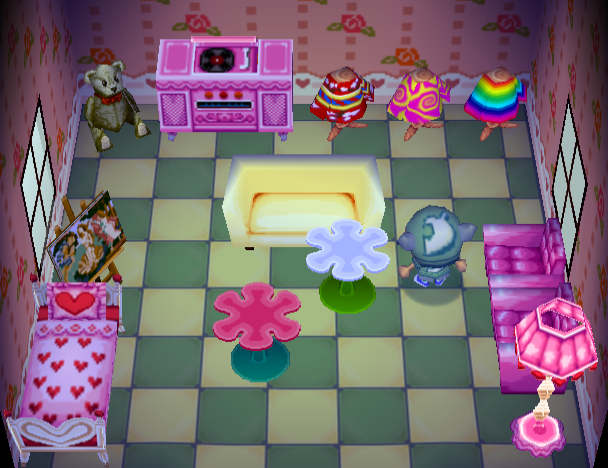 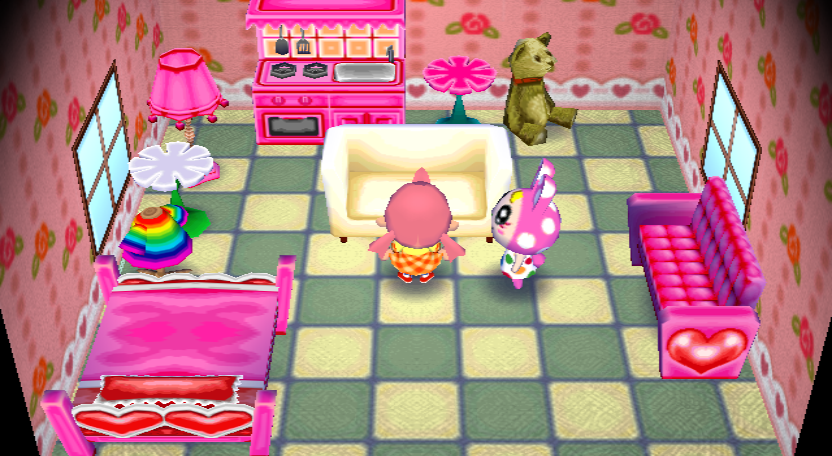 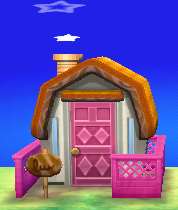 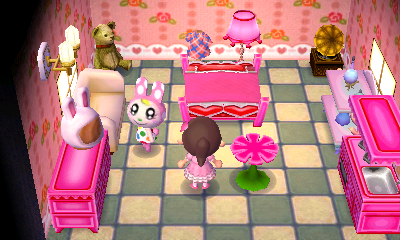 In Animal Crossing: New Horizons, if Chrissy is one of the villagers who moved in during the main storyline after the villager house development quest, her house will have a combination of non-craftable furniture, plus items crafted by players during the island development storyline, primarily from the Wooden Block Series. She cannot have her initial house interior unless she moves out of the player's island or the Happy Home Paradise DLC is purchased, in which either the player or Isabelle can reset the interior. 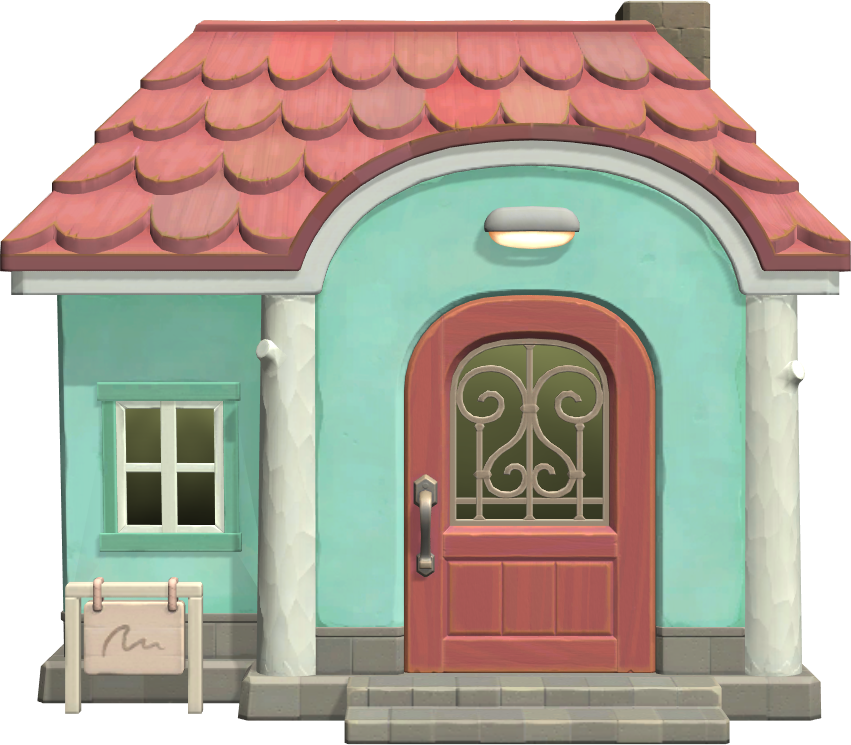 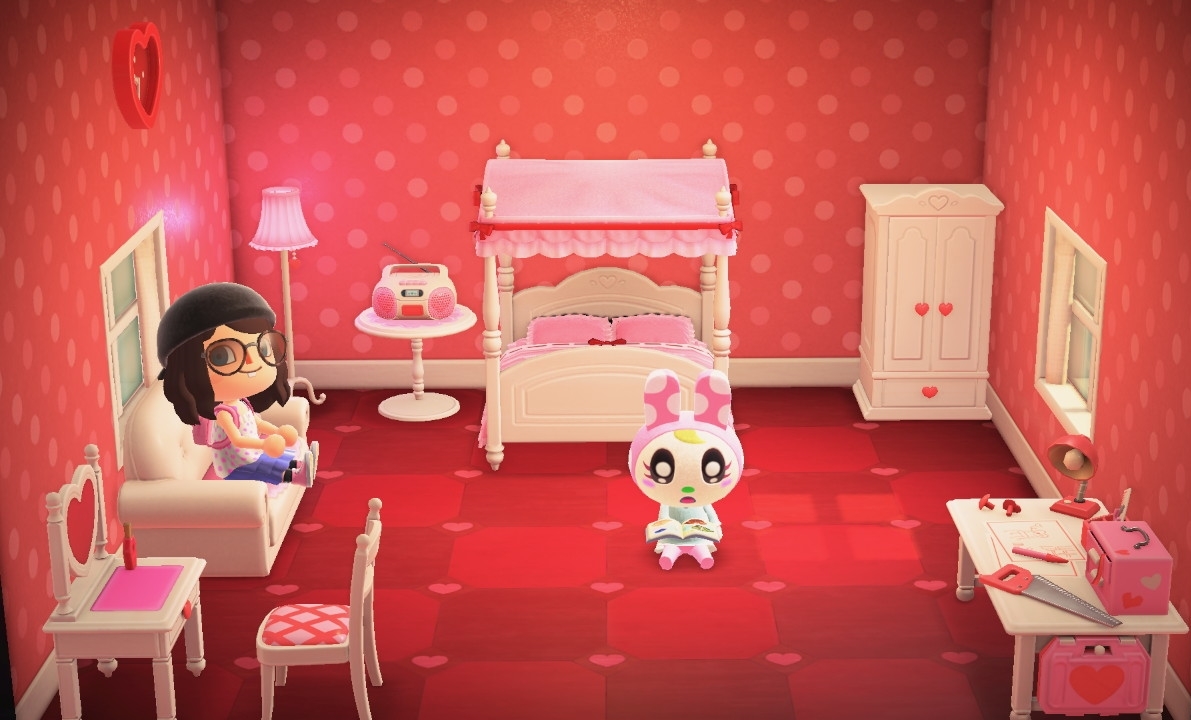 In Animal Crossing: Happy Home Designer, Chrissy unlocks several items that are related to Francine, such as Francine's Pic and Bubblegum K.K., items that feature Francine's visage. She also unlocks the Bunny C. Balloon and Bunny P. Balloon, which represent Francine and Chrissy respectively, as they are shaped like rabbit heads and match their respective fur colors. Francine's client's vision is a direct reference to Chrissy, as it involves designing "A Chrissy shrine."

Chrissy is one of the 40 villagers in Animal Crossing: Pocket Camp who have been in the game since its release. 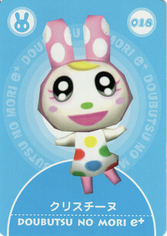 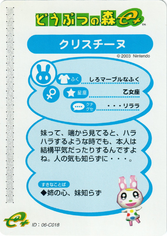 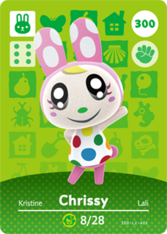