This article is about the game. For the series, see Animal Crossing (series).

Animal Crossing was a commercial and critical success, selling more than 2 million copies worldwide and garnering strong reviews from gaming media. The game became a Player's Choice title in North America. Due to the successful localization effort, the game was translated back into Japanese and released in Japan as Doubutsu no Mori e+, which features the western-oriented changes as well as additional content not present in any of the previous versions. 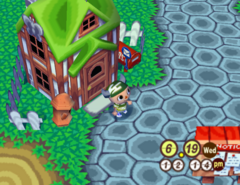 The Nintendo of America localization team began writing game dialogue in early 2002; however, translation of the game's hundreds of items began months earlier.[2] Unlike the extended localization and development process for recent titles in the series, Animal Crossing was localized in the span of eight to twelve months. During this time, the team translated over 30,000 files of text,[3] worked to develop new items and events to appeal to a North American audience. 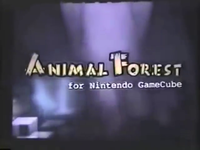 In April 2001, shortly after the release of Doubutsu no Mori and eight months before the release of Doubutsu no Mori+, producer Takashi Tezuka stated in an issue of Nintendo Dream that Nintendo of America was preparing for an international release.[4] The following month, on May 16, 2001[5] at Nintendo's pre-E3 press conference, a six-second montage of gameplay footage from what was then known as Animal Forest was shown to members of the media as part of a larger reel featuring upcoming Nintendo GameCube titles.[6] The clip did not feature any dialogue, however the presence of the shrine indicates that it was still early in the localization process, if not footage directly from the Japanese version.

As early as October 2001,[7] Nintendo established a page on their website for Animal Forest noting it was "being optimized for its U.S. debut on the GameCube."[8] A few months later on February 28, 2002, at a Nintendo Roundtable Conference, Shigeru Miyamoto confirmed that localization of Animal Forest was "progressing and moving along quite well" with then-Nintendo president Satoru Iwata projecting it to be released "sometime in the fall."[9] About a month later on March 30, 2002, the game's name was officially changed to Animal Crossing,[10] as reflected on Nintendo's website at the time.

On May 22, 2002, at Nintendo's pre-E3 press conference, an extended video was shown introducing Animal Crossing and highlighting its ability to connect with the e-Reader and Game Boy Advance.[11] Iwata also confirmed the game for September release in North America. Later that day, Animal Crossing made its second E3 appearance, this time as a playable title on the show floor.[3] It was generally overshadowed by high-profile titles, however it still received the third-place spot on the Game Critic Award's list for Best Original Game of E3 2002.[12] Animal Crossing was released in North America on September 16, 2002.[13][14][1] There were reports, however, that select Blockbuster Video locations had received and began renting advance copies of the game as early as September 6.[15]

North America to Australia and Europe[edit] 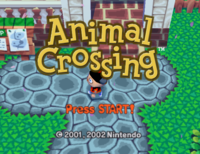 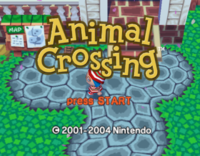 On August 7, 2002, Nintendo of America announced a contest whereby 125 teams of two would be selected to receive advance promotional copies of Animal Crossing.[1] The submission deadline for the contest was August 12th. To be considered for selection, applicants had to submit a written response of 50 words or less explaining why they should be chosen as Pioneers. Those selected received a special Animal Crossing disc marked "for promotional use only," along with a 59 block Memory Card and a promotional Animal Crossing calendar. Pioneers received the game a month early and were expected to help Nintendo generate online buzz in advance of the title's release. Pioneers were also given exclusive access to a web forum where they could discuss the game amongst themselves as well as provide feedback to Nintendo representatives. At the end of the experience, the Pioneers were invited to an online chat with a few of the members of the game's localization team.[16] An analysis of the standard and promotional game disc concluded that the two were byte identical,[17] meaning that no changes were made to the final version as a result of Pioneer feedback. The promotional copy and calendar have since become collector's items, with one set selling for over $500 on eBay in March 2014.[18]

From August 30 to October 15, 2002, Nintendo of America initiated the Animal Crossing "Deck Out Your Room" Sweepstakes.[19] One grand prize winner received a TV, headphones, and CD player from Panasonic, a Nintendo GameCube, a Game Boy Advance, five GameCube games, five Game Boy Advance Games, two WaveBird controllers, and a one-year subscription to Nintendo Power. Five first prize winners received a Nintendo GameCube, a copy of Animal Crossing, and a one-year subscription to Nintendo Power.[20] Those who registered for the sweepstakes received a free Animal Crossing screensaver.[21]

Animal Crossing was included in many year-end 'best of' lists upon its release in 2002. It has also been featured in several all-time top video game countdowns and has received multiple awards and nominations. Review aggregator Metacritic notes a Metascore of 87/100 for Animal Crossing,[22] which places it just behind Animal Crossing: New Leaf's score of 88. In May 2021, Animal Crossing was inducted into the World Video Game Hall of Fame.[23]