This article is about the Game Boy Advance minigame. For the island as it appears within the GameCube game, see Animal Island. 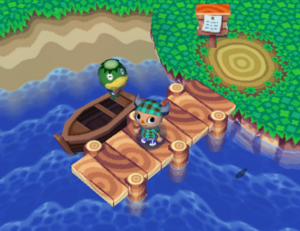 Kapp'n waiting at the pier.

In Animal Crossing, a Game Boy Advance connection is required for Kapp'n to appear at the village's dock, where when spoken to he will ferry the player to Animal Island. When returning to the mainland, Kapp'n will offer to save a record of the island to the GBA with whatever changes the player made to it on the GameCube.

If on the mainland, the connected GBA already has an island loaded with changes made from the minigame, these changes will reflect on the GameCube save file. Even if the GBA has an island from another village, the player can temporarily visit that island and save any changes made back to the Game Boy Advance while retaining the save file's main island. If two GBAs with the game loaded are connected with the Game Boy Advance Game Link Cable, then they will have the option to trade islands, which will save the new island to the GameCube town's save file when it is loaded at the mainland dock. This is the only way to change the islander in Animal Crossing. 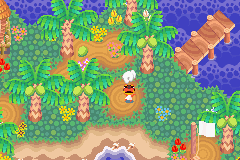 Drift is moved about the island

Once the island is loaded onto the Game Boy Advance, the player can use a cursor to interact with the islander living on the island and any items dropped there. Once the islander's house is clicked, they will exit and wander around the island regardless of whether they were asleep on the GameCube. Islanders can pick up items, eat fruit, and equip tools (the player must leave the tools there for them on the GameCube). Islanders can catch fish, items or trash with a fishing rod; chop down trees with an axe; catch flying presents with a net; and bury and dig up items with a shovel. The cursor can be used to guide them to do these.

The actions an islander performs will affect their mood, which will be reflected by their emotional cues and changes in the music. If the player gives the islander fruit, the islander's mood will improve; giving them additional fruit will result in them dropping varying amounts of Bells. Each islander has one mainland fruit that is their favorite and one they dislike. Giving the islander their favorite fruit will improve their mood more quickly, while giving them the fruit they dislike will upset them so that they will not give any more Bells until their mood is improved again. It is also possible to upset the islander by tapping on them repeatedly. Fishing items and fish will make the islander happy, whereas catching trash will disappoint them. Occasionally, floating items can fly by which their islander can capture with a net; these can be a wide variety of items determined by the islander, their mood, the time of day, and whether they are carrying a regular net or a golden net. Islanders can use a shovel to dig up buried furniture and replace them with other furniture, including island-exclusive furniture such as the NES games Wario's Woods and Baseball if they are in a good mood. They will also replace gyroids with other gyroids in this way. 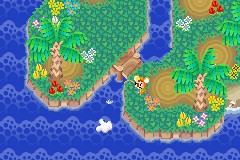 Making the islander happy makes it more likely for them to give the player Bells and trade items, and using golden tools for various tasks can also improve results. Interacting with islanders can be a useful tactic for making Bells and is the only way to obtain island-exclusive items. Any changes made to the island in the minigame will be transferred to the island on the Nintendo GameCube by talking to Kapp'n with the minigame connected. This feature is removed in Doubutsu no Mori e+, due to the player no longer requiring a linked Game Boy Advance to access the island.