Wario's Woods can be obtained from Animal Island. It does not have any color for the purpose of fêng shui. This item is lucky, meaning it gives a 777-point Happy Room Academy bonus when placed in the player's house.

Wario's Woods in Doubutsu no Mori+ 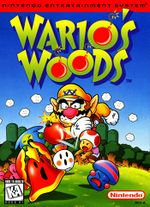 Wario's Woods[nb 2] is an puzzle game originally released on the Famicom in Japan on February 19, 1984, and on the Nintendo Entertainment System in North America on December 10, 1994 and in Europe in 1995. It was also released on the Super Nintendo Entertainment System in 1994. Taking place in the Peaceful Woods, Wario has taken over the forest with mysterious powers. Toad, along with Birdo and the Sprites, ventures through the wood and defeat Wario and his minions.

The objective of this game is to destroy all the monsters that are on-screen. If the player manages to do this, they will advance to the next level. To destroy the enemies, the player must place bombs that match their color next to them; when three items of the same color with at least one bomb are placed horizontally, vertically, or diagonally in a row, all the items in the row are cleared. The player receives a game over when Toad is trapped by bombs or monsters.

Wario's Woods is notable for being the last first-party game released on the Nintendo Entertainment System.

Wario's Woods on other wikis