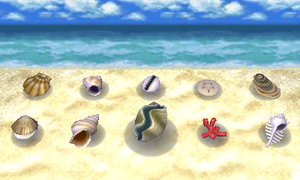 Shells are common items that wash up on the sea shoreline in every Animal Crossing game. They provide an easy, yet minimal, source of income, and are often used in the first few days in order to obtain enough Bells to buy tools. A limited number of shells appear at a time, usually 15.

If they are picked up, they will slowly start to reappear in a new location. Dropped shells do not affect the player's environment rating. Entering buildings and saving the game will likely cause new shells to show up. Coconuts that wash up on the beach in Animal Crossing: Wild World and Animal Crossing: City Folk do not count towards the 15 shell limit.

In Animal Crossing: Wild World, the scallop can only be obtained in the Golden Axe trading event from Tortimer in exchange for a massage chair. If Pascal is given a Scallop, the player will receive either a Golden Axe or Pascal's picture.

In Animal Crossing: City Folk, scallops can be traded with Pascal for an item from the Pirate Theme, including the Sea View wallpaper and Ship Deck flooring. Pascal will only accept the scallop, not the white scallop.

In Animal Crossing: New Leaf, Scallops and Pearl Oysters are sea creatures, and are thus obtained from diving, as opposed to shells in earlier installations of the Animal Crossing series. Additionally, the player can take a Giant Clam to Cyrus at Re-Tail along a K.K. Slider song in order to create a music box.

In Animal Crossing: New Horizons, while Hermit Crab and Manila Clam can also be found on the Beach, they are not classified as a Shell.

Shells are used as a crafting material in the DIY recipes for the following items:

This page could be improved with the addition of images.
You can help by uploading one or more images and including them on this page.
Retrieved from "https://nookipedia.com/w/index.php?title=Shell&oldid=768944"
Category:
Hidden category: