The sea is the body of saltwater surrounding the player's town or island in the Animal Crossing series. Despite being a sea, the Animal Crossing game's sea has no tides, allowing the size of the beach to remain constant. The beach itself runs the length of the sea, with occasional breaks where outcrops lie, and where the river meets the sea. These outcrops, also known as capes, have small cliffs that separate them from the sea.

In Animal Crossing, the waves carry the lure on the fishing line towards the beach, while in Wild World and City Folk they carry it out to sea. If a house is located within close proximity to the sea, then waves can be heard crashing against the shoreline from inside. 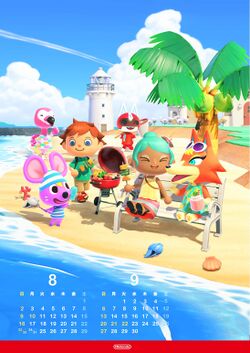 Where the sea meets the land, a beach is located. Characters that walk on the beach will leave footprints that will disappear after a short time. Shells will wash up on the beach daily, and occasionally, in Wild World and New Horizons a note-in-a-bottle will wash up. In Wild World and City Folk only, coconuts will also wash up on shore and can be used by the player to grow palm trees, which produce two coconuts every three days. However, in order to grow into a palm tree, the coconut has to be buried near the beach. Besides serving as a source for coconuts, palm trees also serve as a home to many rare bugs, such as the Elephant Beetle and the Goliath Beetle.

In Animal Crossing: New Leaf, in addition to being located along the southern side of the village, the beach is also located on either the eastern or western sides of the village. There may be a small portion of a beach that cannot be accessed normally without a wet suit, which allows players to swim and dive in the sea. The wet suit also allows them to jump from cliffs and into the sea or the sand.

In Animal Crossing: New Horizons, the beach appears along all sides of the Deserted Island. It joins up with the grass more uniformly than in previous titles; rather than being formed as small slopes adjacent to a small sudden drop, or being accessible by a ramp down a tall cliff face, it is separated from the inland grass by a small dirt incline. Platform-like rocks also decorate the beach, varying in size and shape, with some having additional rocks stacked on top of them. A very small beach is generated on the northern shore of the island, with the rest of the shoreline being made up of large rocks. Manila clams are sometimes buried in the beach sand, and can be identified by small jets of water periodically emerging from the sand. The player can dig them up with a shovel. The airport and an empty dock generate on the beach, though the two will never be directly adjacent. The airport always generates on the southern side of the beach, the only side accessible in a new game, though its exact latitude can vary between different players' islands. The dock will generate on either the west or east side.

A small number of special visitors can be found within close proximity to the beach and the sea. On weekdays in Wild World, Pascal the sea otter can be found standing on one of the two capes by the sea from 6 AM to 12 AM, where the player can listen to his diffuse and sometimes random thoughts. After the listening to Pascal, the sea otter will give the player a random ship-themed furniture before performing a perfect dive into the sea. In Animal Crossing, New Leaf, and New Horizons, Gulliver the gull will wash up onto the shore infrequently.

In City Folk, if Gulliver's U.F.O. is shot down, it will appear crashed on the beach the next day. In New Horizons, once the player wakes up Gulliver, five communicator parts will be buried in the sand of the player's beaches and can be identified in the same way as manila clams.

In New Horizons, Redd's ship will periodically dock at the island's northern beach after the museum has been upgraded to include an art gallery.