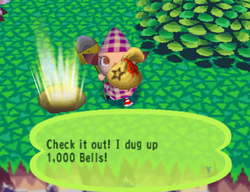 The player digging up a shining spot in Animal Crossing

In Animal Crossing: New Horizons, shining soil has been redesigned to be more subtle, and it appears in a random location on the player's island each day and contains 1,000 Bells. If the player buries Bells in a shining spot, a money tree will grow. The player can earn up to three times the amount buried by doing this, but if they plant more than 10,000 Bells, they risk losing money.