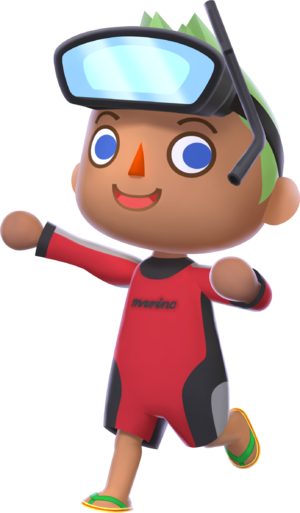 A boy in a wet suit with a tan

During summer (the second half of July to September) it is possible to get a tan. By standing in a clear sun long enough, the player's skin will go up through levels. There are 5 different levels, each one having a darker tan than the other. The tan, however, will appear the following day.

Getting a tan in Animal Crossing: City Folk[edit]

One can get a darker tan in the summer by walking anywhere in the sun for long enough. If players have the darkest tan (Level 5), it will stay Level 5. But if they take a break and avoid the sun, the tan disappears a bit every day. Also, a tan begins to disappear on rainy or cloudy days. There are five levels of a tan, each one darker than the last.

The player can get a tan from July 16th to September 15th. The game has to have a clear sky outside, and it must be during daylight hours (when the clock on the upper left-hand corner of the screen has a full picture of the sun, which should be between 8 AM and 5 PM, depending on the time of year). The only thing that stops a tan from appearing is an umbrella.

The second option to get a tan is to use a Mii Mask with the chosen skin tone at Shampoodle.

A tip for knowing if one is actually tanning is to make a plain pattern that is skin colored (Palette 10/16) and wear it as a shirt, in the sun. If the character's skin is becoming darker than the shirt, there is a tan, and it will becomes more noticeable after approximately 2 to 3 hours.

During the winter months, it is still possible to get a tan by taking Kapp'n's boat to the island in Animal Crossing. The restrictions seem to be the same. Note however that the islander on the Game Boy Advance is not affected.

To remove a tan, the player should go out with an umbrella or avoid daylight. Drastic measures include time traveling or staying off the game for long periods of time. In WW and CF, hats are unable to prevent tanning, but in NL, wide-brimmed hats have been proven to prevent tanning.

This page could be improved with the addition of images.
You can help by uploading one or more images and including them on this page.
Retrieved from "https://nookipedia.com/w/index.php?title=Tan&oldid=357835"
Category:
Hidden category: