The Fall Update for Animal Crossing: New Horizons (version 1.5.0), known in Europe as the Free Autumn Update,[1] was an update that released on September 30, 2020, with version 1.5.1 being released on October 9, 2020. The update primarily brought back the previously cut holiday, Halloween, alongside its host Jack. It was announced on September 25, 2020.[2] Players who downloaded this update would receive a Ring-Con as a gift.

Halloween, alongside Jack, returns in 1.5.0. For the remainder of October, the player can purchase Spooky Series furniture and one Candy for day in Nook's Cranny. During the month of October, Able Sisters will sell costumes related to Halloween, while Kicks will exclusively sell the Impish Wings.

On Halloween itself, the player has to do trick or treating with their villagers, but unlike previous games, treating will allow the player to earn prizes, while being tricked messes up the player's skin tone and eye contact while also adding a face paint. Jack will roam around the island asking the player to give him either Candy or Lollipop. The former will give the player Jack's Robe and Jack's Face which will scare any villagers into giving Candy. The latter will give the player a Spooky Carriage, the DIY recipe for Spooky Carriage, and a DIY recipe for a Spooky Wand. Failure to give these treats will result in Jack messing the player's skin tone, eye color, and face paint.

The player changing their eye colors.

Posters are no longer added to the Nook Shopping selection after picking them up; they are now exclusively unlocked by using amiibos on Harv's Island. 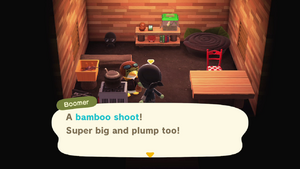 Boomer using the incorrect dialogue to address being gifted a Bamboo Shoot.