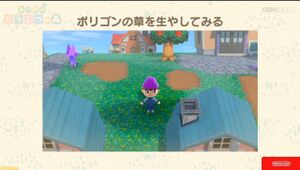 A preview of an early build of New Horizons.

At the Computer Entertainment Developers Conference of 2020, art director Koji Takahashi, player and villager designer Asako Shibata, and item designer Hiromi Sugimoto spoke about the art direction regarding Animal Crossing: New Horizons. During their presentation, screenshots were shared of an early build of New Horizons. In those screenshots, the grass is shown to have a vibrant grass pattern underneath a grassy texture. The trunk of each hardwood tree featured no texture unlike the final build. Small pockets of dirt were featured, as well as dirt and stone paths. Villager houses had a small window on the top of the screen and feature a different roof and chimney, while the player's house appears to have been finalized in this build of the game. One screenshot showcases a building to the right of the player surrounded by stone paths, possibly indicating that the building was originally an older version of Resident Services. Another screenshot highlighted a different cliff texture, a white wooden fence, an early weed design, and an early stone bridge design. The screenshot also showcased a different water shader that is more opaque than the final build, as well as a different clock interface that nearly resembles that of New Leaf and an early build of the map UI.[1] 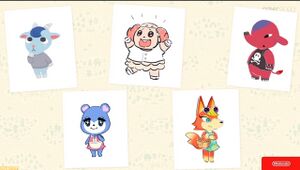 Concept art of some of the new villagers from New Horizons.

Later, the team addressed villager designs, in which various members began experimenting with various designs to see what would work out when developing New Horizons. The team also shared art concepts of the new villagers from New Horizons. In this art concept, Sherb wears an entirely gray sweater; Judy wears a different dress that nearly resembles a maid dress, lacks her blue-pink gradient, and has heart-shaped ears; Dom wears a dress shirt and does not have stripes on his horns; Audie's sunglasses are slightly smaller; and Cyd had a different hairstyle, wearing a skull tank and having a red tail.[1] 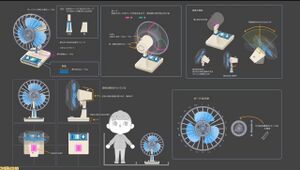 Lastly, the team addressed furniture design, desiring to match the player's expectations whenever they decorate with any sets of furniture. They demonstrated with a retro fan, showcasing the fan's guard frame and buttons to make it stand it to players. In an early build, the guard frame of a Retro Fan had an equal proportion, while the final build had the front guard frame having more proportion than the back guard frame. The Retro Fan in the final build was also resized, heightened, and given extra details compared to its early build.[1] 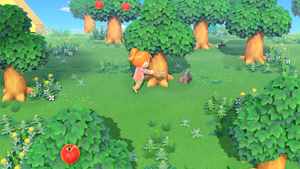 Animal Crossing: New Horizons was formally revealed in E3 2019, although many elements of the game had changed from its reveal on June 11, 2019 to its release on March 20, 2020.

Fuchsia's house is different in this build of the game than the final version. While her wallpaper and flooring remained the same, Fuchsia originally featured a wooden simple bed instead of the loft bed with desk in the final game. Her house layout also changed, with the cute DIY table, ironwood cart, double sofa, cute wardrobe, monstera, wall-mounted TV (50 in.), cute floor lamp, and cute music player in a different placement in the initial build. Fuchsia's rock guitar was also in the Coral Pink variant than the Fire Red variant. Additionally, the red cute floor lamp's shade was colored white in this build instead of red in the final build.

At the end of the E3 2019 trailer, Tom Nook appears to the player to deliver them their itemized bill. During his conversation in this demo of the game, Tom Nook's voice is high pitched, matching similarly to the default voice for lazy villagers. The final game pitches his voice down significantly.

Although much of New Horizons had been finalized in this build, there are some elements that differ a bit from the final game. Several of these elements remain from the E3 showcase, such as the player using the Island Designer without a helmet, the Call Resident app named the "Call Islander" app, and Tom Nook's voice sounding exactly as he did in the E3 2019 trailer.

Outside of the DIY Recipe app, item names were lowercase instead of the sentence case that was included in the final product. The interface that appears whenever a player eats an edible item is colored red and does not feature the "/10" denoting the maximum number of energy points obtainable.

Despite version 1.0.0 being the final build of New Horizons, there were notable changes in the day one 1.1.0 update made to specific images for certain assets. These included:

Since version 1.0.0 and before the addition of all of them in various updates, data existed for the following special characters who were not present in the game outside of posters obtainable from Nook Shopping. This included an internal ID, the character's birthday, and their name bubble color.

In addition to other data, an icon for DJ KK was present in 1.0.0, before being removed in version 1.1.0. DJ KK would eventually be added to the game in version 2.0, albeit with a different icon.

There are several unavailable animations within the game's code that can only be used by the player via hacking. These animations are either reserved for special characters or villagers or are outright unused. In addition, some reactions listed here were previously available in past games in the series.[2] 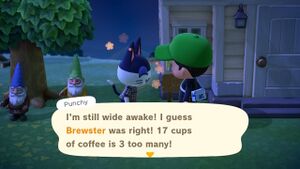 References to The Roost existed in New Horizons prior to its addition in version 2.0.[3]

In version 1.0.0, a executable file known as IdrMuseumCafe00 suggested that the museum would have a room dedicated to The Roost. This was promptly removed in version 1.1.0, alongside the modification of any villager dialogues that reference Brewster.[3][4]

In version 1.10.0, assets regarding The Roost resurfaced, with evidence that a café entrance, a new string called cCafe, and a third floor of the museum that was highly suggested to be the location of The Roost. Version 1.11.0 introduced a new flag setting called cNpcMemory:TalkProgressMuseumBuiltCafe".[5]

References to gyroids existed in New Horizons prior to their addition in version 2.0.[3]

A 1.0.0 executable file exists as IdrMuseumHaniwa, suggesting that gyroids were to be given a separate room in the museum. This file, alongside any dialogue that mentions gyroids, were removed in version 1.1.0. Another string, 35_Gyroid, surfaced in version 1.4.0, once again suggested the inclusion of gyroids.[3]

Internal references to sewing (Ftr_Sewing) and cooking (Ftr_Cooking) could have be found in the game's strings prior to their removal in version 1.4.0. Cooking would eventually be added in version 2.0.

Event flows were found for Nat and Chip, suggesting that they were replaced by Flick and C.J. far into development.[3]

Internal references to a Portuguese translation of New Horizons has also been found in the game, with strings pertaining to both European (EUpt) and Brazilian (USpt) Portuguese.[3]