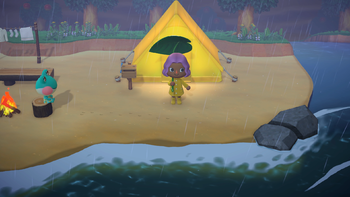 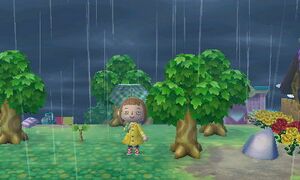 Rain falls throughout the year, in all four seasons. Rain, like snow, waters wilted plants without the need for a watering can. Rainy weather switches the hourly music to varients with a light ringing noise, in Animal Crossing, only one tune plays during rainy weather, no matter the hour. Villagers who are outside when rain is falling carry umbrellas and might also comment on the weather. Frog villagers, however, do not carry umbrellas since they are amphibious. After a rainy day, it is common to find Gyroids around the player's town. Villagers may also comment on the weather. In New Horizons, villagers may wear rain clothes and hat instead of holding an umbrella. 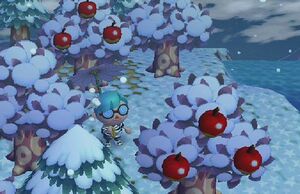 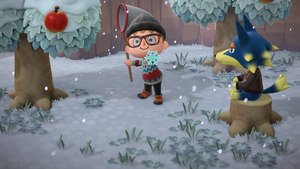 Snow falls from mid-to-late November until early-to-late February (or late May until late-August in the southern hemisphere in Animal Crossing: New Horizons), settling in early December, with complete coverage by the 11th of December (10th in Animal Crossing and the 11th of June in the southern hemisphere in New Horizons). Settled snow covers all grassy areas, buildings and trees. Snowballs appear around town every day in winter, and can be rolled into Snow People. Additionally, in New Leaf and New Horizons, snowflakes will fly around town and can be caught with a net. When snowing, hourly music is altered slightly to sound more like the rain varients but with sleigh bell sounds integrated into them as well. Like rain, snow hydrates wilted flowers without the need of a watering can. Villagers who are outside during winter may talk about the abundance of snow or the cold. 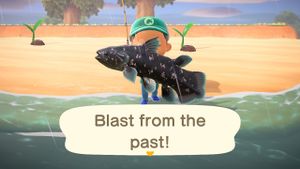 Fishing on a rainy day is the only way to catch a Coelacanth (alternatively, a snowy day works in certain games)

Rain and snow prevents butterflies (prior to Animal Crossing: New Horizons), many varieties of beetles, the Scorpion, and the Tarantula (with the exception in New Horizons for the latter two) from appearing even when they are in-season. However, some bugs only appear when it rains, such as the Snail. Cicadas can still be found when it is raining, but they make no noise. Catch quotes for cicadas in New Leaf and New Horizons are also different when caught in the rain.

The six cloud stages. Please note that these clouds are from City Folk

Clouds in Wild World have a more uniform shape

There are many different levels of cloud coverage. These levels can potentially change every hour, and range from clear to complete. In the original Animal Crossing, the layout of the game ensured that the sky was only visible at one occasion, on the train, where it was always cloudy. This means that the paragraphs about cloud coverage only apply to games following Animal Crossing. Cloud coverage changes abruptly in Wild World, but in City Folk changes gradually in the last ten minutes before the hour.

In addition, weather can be forecasted, providing a short-term summary of the overall conditions of the following day. If the player turns on a television, it will, at certain times of the day, display the weather, using symbols such as a sun, cloud or raindrop. This forecast is always correct, but is limited to generalizing the next day's weather. It cannot, therefore, give hourly predictions. 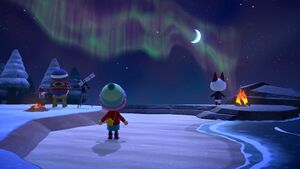 In Animal Crossing: City Folk and Animal Crossing: New Leaf, the aurora is visible on clear winter nights, and can be seen from 8 PM until 10 PM. It is at its brightest at 9 PM, shining bright shades of pink and green and moving constantly in a folding motion. In Animal Crossing: New Horizons, it can appear in any hour with clear conditions between 7 PM and 4AM, as long as there are no shooting stars that night.

There are currently 40 possible weather patterns in New Horizons, six of which had been added in updates.[2][3]