In Doubutsu no Mori, the coelacanth is the only saltwater fish. It is also available at different times (4 AM to 9 AM and 4 PM to 9 PM) than in Animal Crossing or Doubutsu no Mori e+.

In Doubutsu no Mori e+, the coelacanth can only be encountered once per play session, even if the player fails to catch it. Saving and quitting and/or restarting the console will allow another encounter.

"Would you look at that! I caught a living fossil! I didn't know they really existed!"

"Woah Woah Woah! I caught a living fossil! Amazing! What were you doing down there?"

"A coelacanth? I caught a living fossil! Amazing! Who knew these things were still around?"

"Holy fish sticks! I caught a coelacanth! Am I saying it right?"

Although Critterpedia states that the coelacanth is available "all year," certain months of the year do not rain, so thus the coelacanth cannot be caught during those months.

"Blast from the past! I caught a coelacanth! Think positive! Be a coela-CAN!"

As with all fish in the Animal Crossing series, the coelacanth can be donated to the museum, followed by a small talk by Blathers about it.

"Hoo, my goodness! Glorious! Seen in this light, of course, it's quite a grotesque beast. And yet, it does have a certain peculiar allure, wot? You may rest assured that we shall treat it with much affection and respect, wot! My word as a gentleowl."

"It was once thought that the coelacanth had gone extinct, eh wot? Indeed, right up until a scholar saw them lined up in a market. Hoo hoo! That would clearly suggest that they are edible, don't you agree? Though I must admit, they don't look like they would taste very good..."

"Many years ago, the theory was that the coelacanth had gone extinct...But as it turns out, it still exists and has been living deep in the ocean this whole time, wot? Imagine! This fish has known the world since the dinosaurs... Perhaps it's the true master of the sea!"

Once the coelacanth is donated, there is information on the board in front of the tank that houses it.

"Coelacanths are ancient fish once believed to be extinct but recently discovered around South Africa. Called "living fossils," they have apparently changed very little over the past 400 million years. They can live for over 60 years and reach lengths of six feet but have rather small brains, even for fish. They have more fins and harder scales than the average fish, making them a rather resilient breed. Their flavour is very different from most fish, and they contain a fat that is indigestible by humans. It's for that second reason that eating them really isn't highly recommended."

"The coelacanth is a deep-sea fish that has been around since the age of the dinosaurs. They were long thought extinct, so when living specimens were discovered, it was quite a shock! Now I'll just have to figure out where in the museum to display it-fish or fossils!"

When donated, the coelacanth can be found in the north-eastern-most room of the fish exhibit, in the "sea" tank which is near the submersible and diving suit. It shares this tank with the barreleye, football fish, and oarfish.

During a Fishing Tourney, when given a coelacanth, Chip will say the following dialogue.

"It may look nasty, but coelacanth with some tangy Gruyère and cream? Num! Nyuuuk nyuk nyuk nyuk!"

"I hear coelacanths are too gross to even THINK about eating! I mean, these have got to be REALLY old. No, thank you. Even I'm not eating an ancient fish, no matter how big or rare it may actually be." 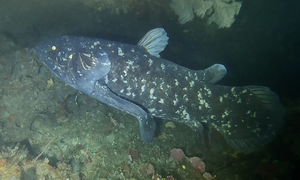 The coelacanth is an ancient order of fish that was, for a long time, believed to be extinct, due to their disappearance from the fossil record 66 million years ago. The first ever live one was caught in 1938. It can grow up to two meters in length and lives for an average of forty-eight years. Coelacanths are found off the south coast of Africa, living in steep rocky shores, sheltering in caves during the day. It can travel around eight kilometers a night in search for food, passively swimming with the current, making it a "slow-moving" fish that only uses its fins to adjust its position. It preys on fish and squid, but some have been known to eat eels, skates, and even sharks. Its main predator is likely to be large sharks.